You are here: Home / Traveling with Kids / Moose Meadow Lodge and Treehouse- Review

My kids were so excited to hear that they were going to stay in a treehouse, not to mention my childhood dreams were finally coming true. We traveled to Waterbury, Vermont to experience a night in the Moose Meadow Lodge and Treehouse.

We were greeted by the owner, Willie Docto, who was happy to show us around the main lodge.

This Adirondack style home has four luxurious guest rooms with amazing natural details such as a sink carved from petrified wood and a large front porch that looks out over the Green Mountains. 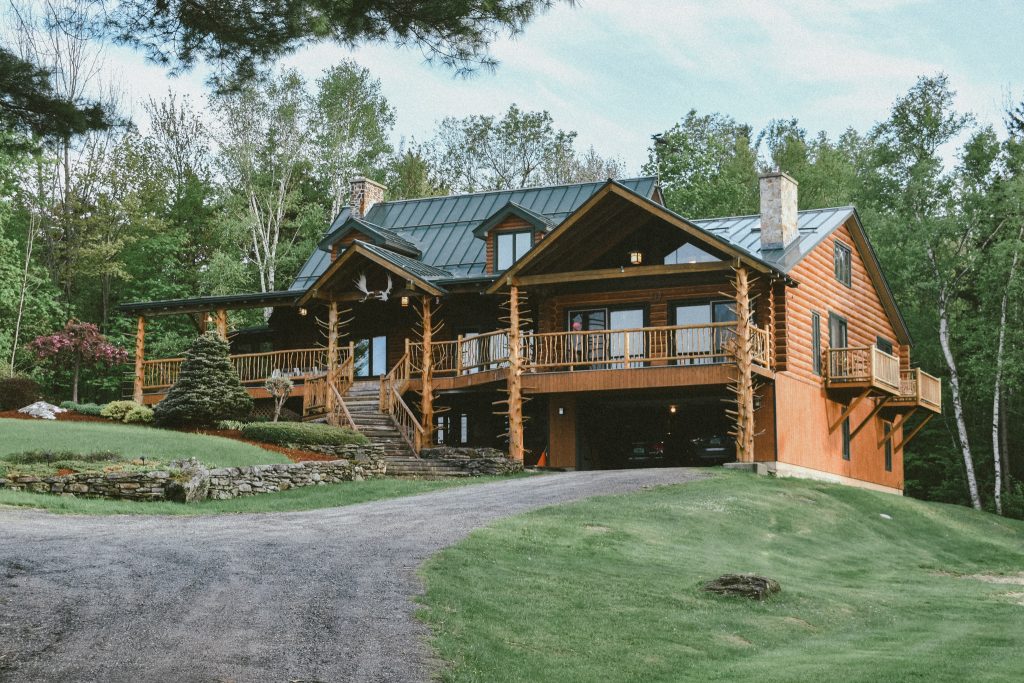 To add to the kid’s excitement, Willie loaded our bags onto a golf cart and drove us down a wooded trail to our treehouse. 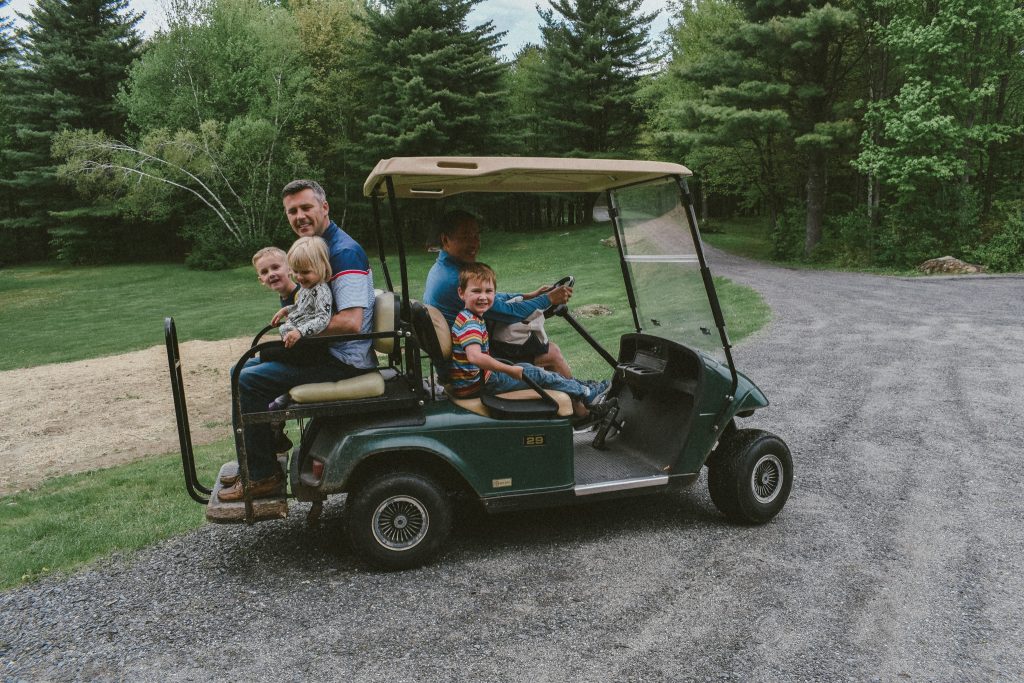 The two-story treehouse overlooks a trout pond and flower-filled meadow that is surrounded by apple trees. It is completely secluded and serene. 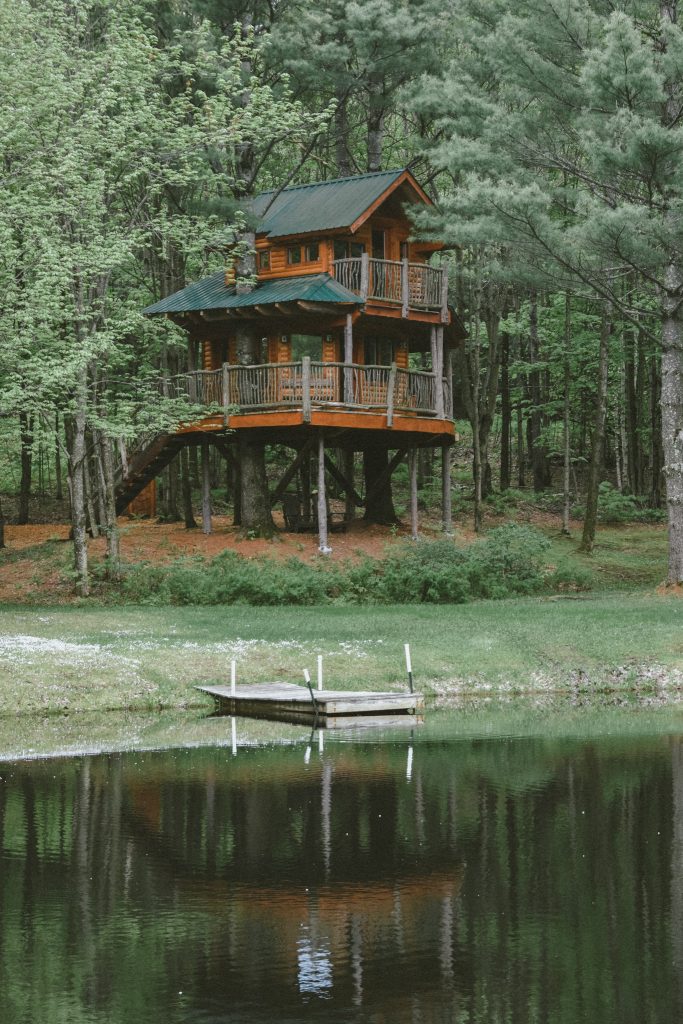 We climbed a flight of stairs and entered the living room area of the treehouse that had a small table with two chairs, a two-seater and a pot belly stove. The owners had set up two cots for the boys to sleep. 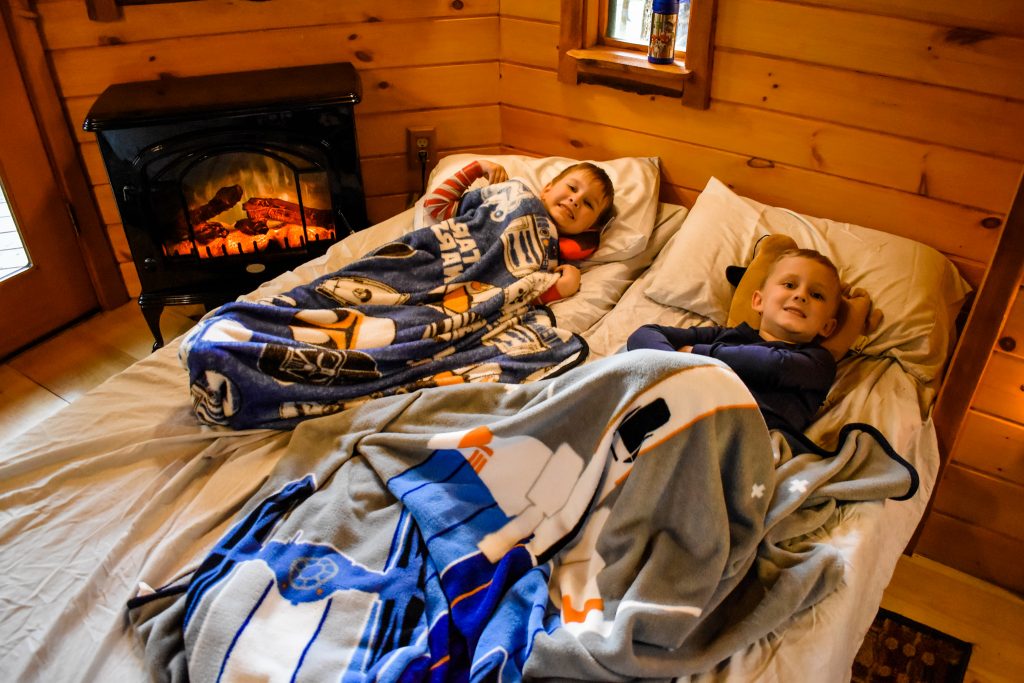 The balcony wrapped around the treehouse and led to the bathroom, which was the pièce de résistance.

An outdoor shower seemingly came out of the the trunk of the tree. When the water fell from the rainfall shower head, it then ran right through the wooden slats to the ground below.

The sink was carved from a large rock so that it formed a river. It was mesmerizing to watch. 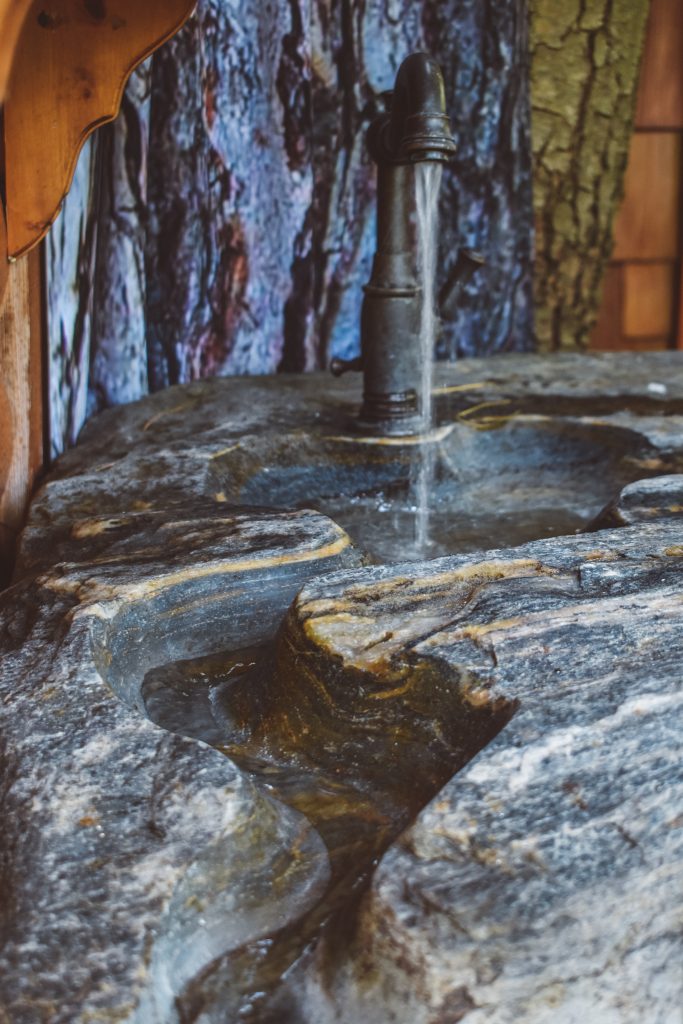 Just beyond the shower was a door to the incinerating toilet, which was not as scary as it sounds and looks just like a regular toilet.

Back inside, a winding staircase led to a bedroom on the second floor. There were 31 windows streaming in natural light.

We set up Lizzie’s crib beside our double bed. There was also a door that led out to a deck so we could look out over the water. 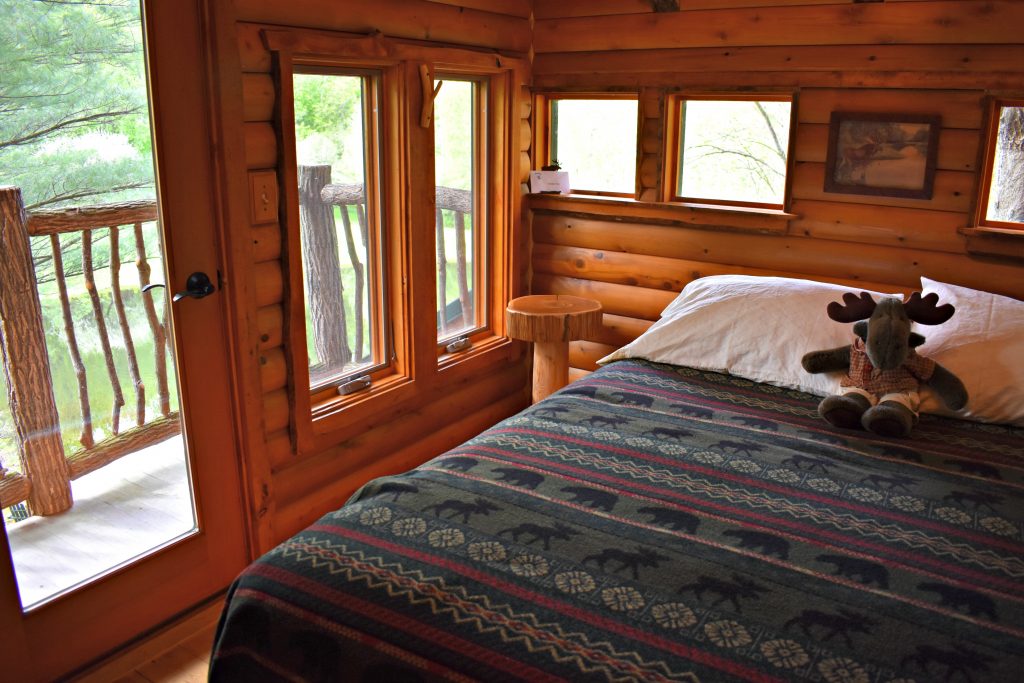 The kids sat on the wharf outside and looked at the rainbow trout in the pond before having a rest in the hammock that hung beneath the trees. 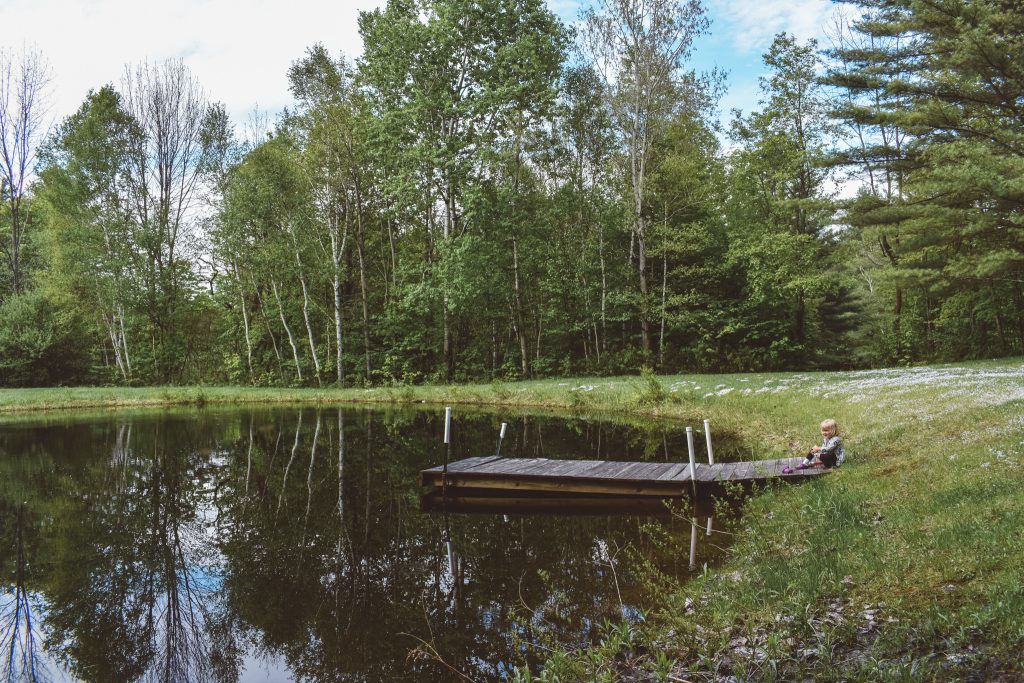 We headed into Waterbury for dinner which was only a 10 minute drive. There are no cooking facilities in the cabin, but we were able to use the kitchen in the lodge whenever we needed to.

While there is electricity in the cabin, there is no television, but the kids didn’t complain once.

We headed back to the cabin just as the pink sky turned to darkness and the spring peepers put on a chorus for us. I could sit out on that porch all night long. There is even an owl that flies around the cabin. 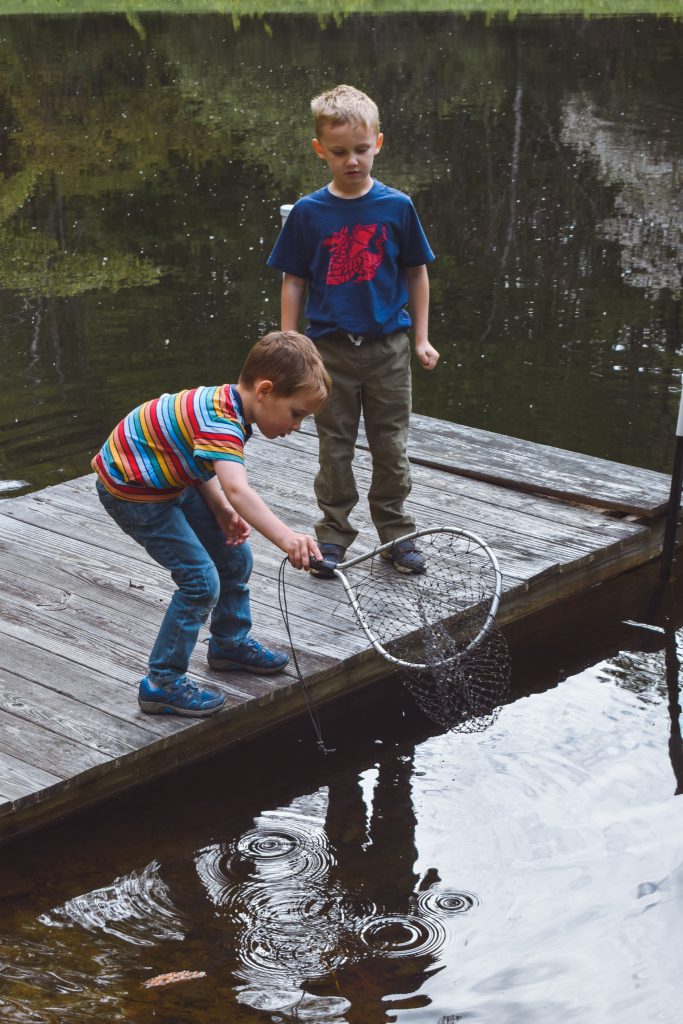 In the early morning, it was still chilly and my husband dared to take the first shower. We were afraid we would be freezing, but it was so comfortable. I have to say it was probably the best shower I have ever taken. It felt so good to stand under that warm water while listening to the birds and looking out over the water. There is a curtain if you prefer privacy but really, you are in the middle of the woods. 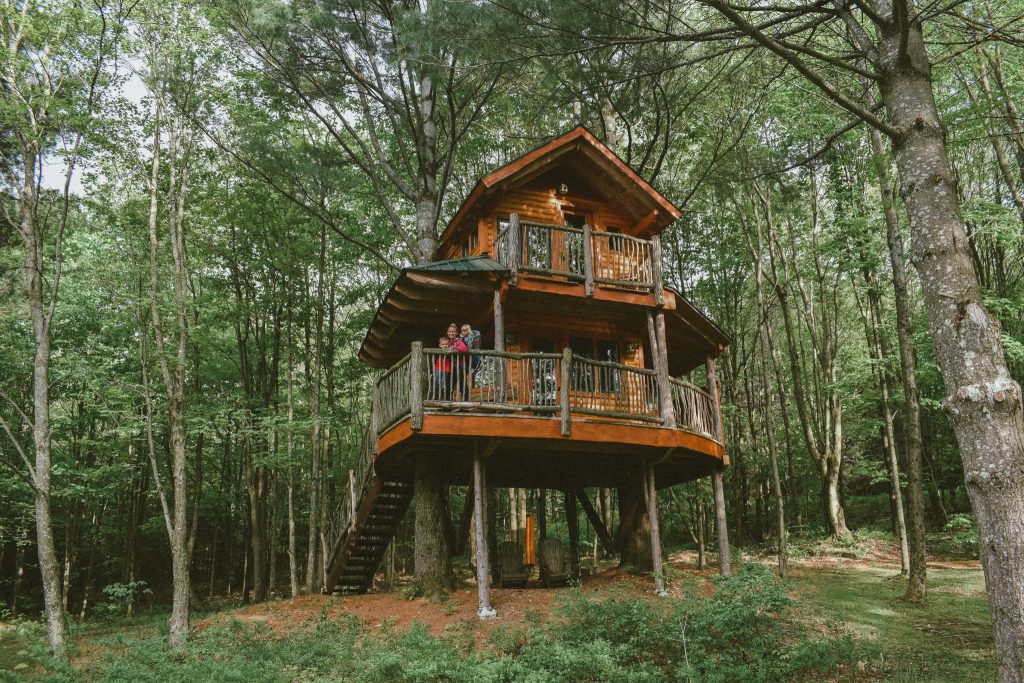 We walked to the main lodge, which only takes 2 minutes. Willie had cooked up a feast for us. We had avocado toast, eggs and fresh coffee. We chatted with the other people staying at the lodge.

Breakfast is included with your stay and each morning it was something new and delicious. He even made the kids waffles. The owners made us feel so welcome, we felt like we had known them forever and were totally comfortable in their home. 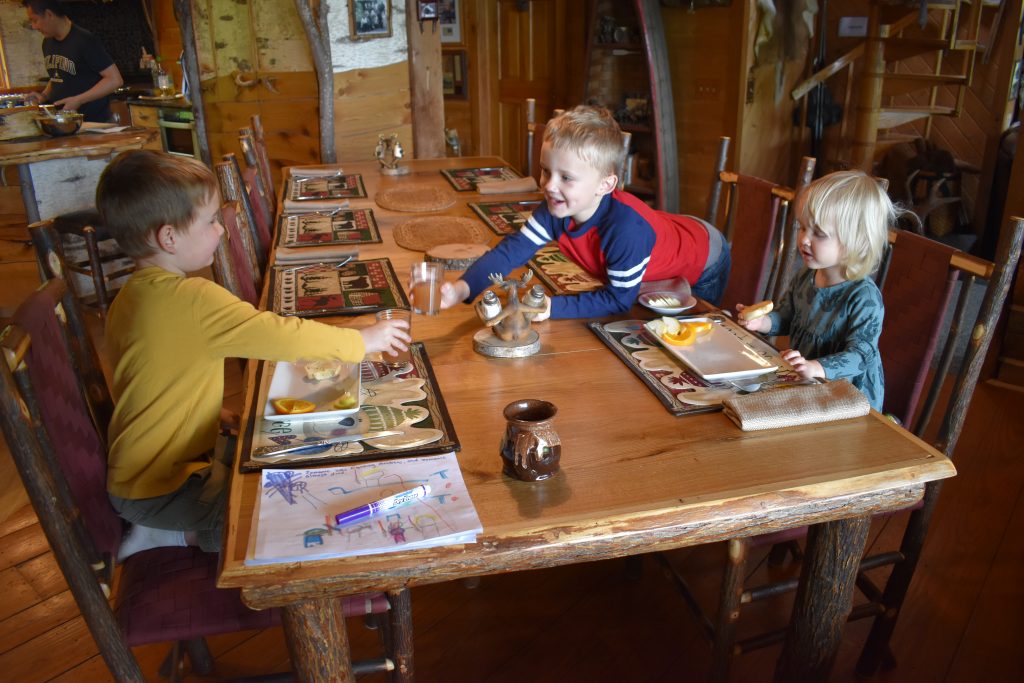 That day, we decided to take a hike to explore some of Willie and Greg’s 86 acres. We were given a trail map and headed to the Sky Loft. It took us about a half hour to get there. The trails are well maintained although it was a bit steep at times and quite muddy due to the season. 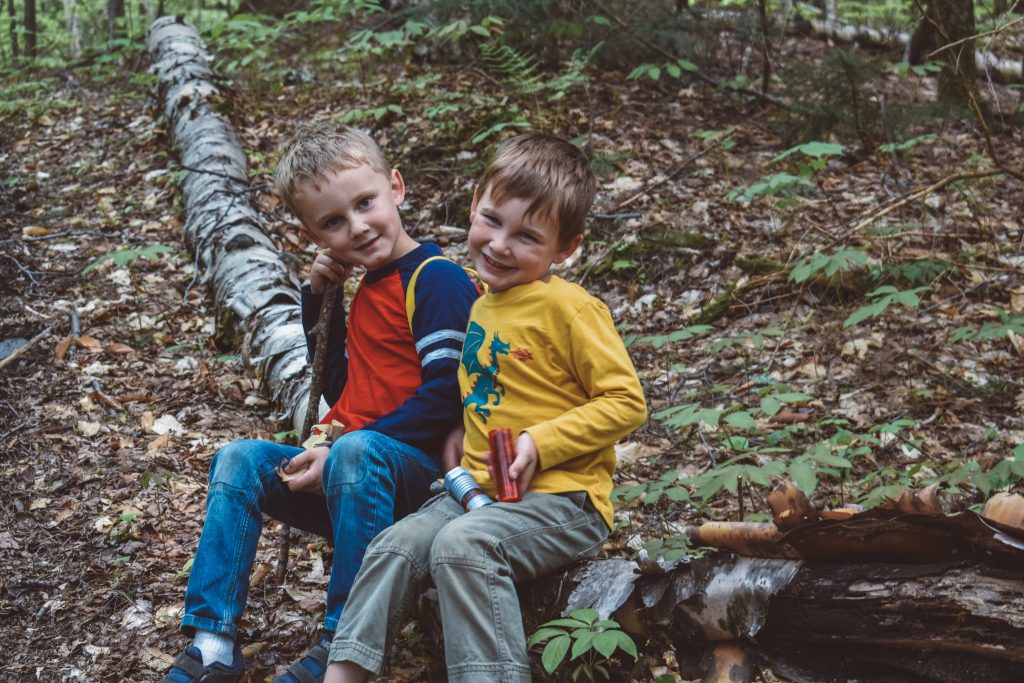 The views were well worth our efforts and the kids loved the Sky Loft, which is a glassed in gazebo that looks out over the mountains. 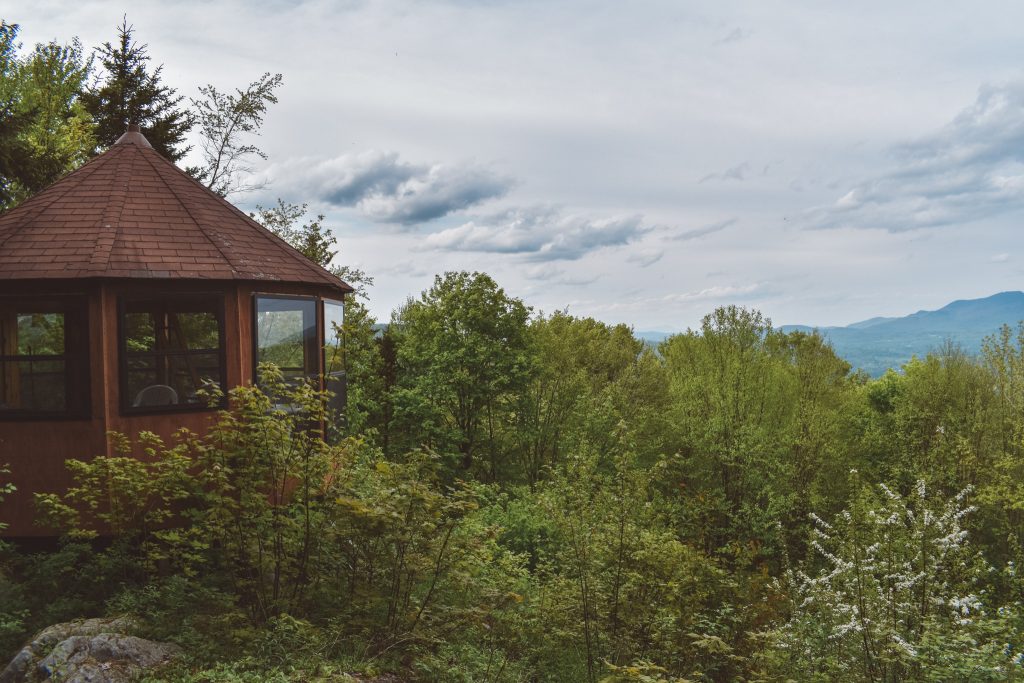 We loved our time at the treehouse and it will be something that my kids will never forget. It was a great place to relax yet there was so much to do in the area.

Willie and Greg were gracious hosts that were the perfect balance of being welcoming and helpful while also giving us space to be together as a family. 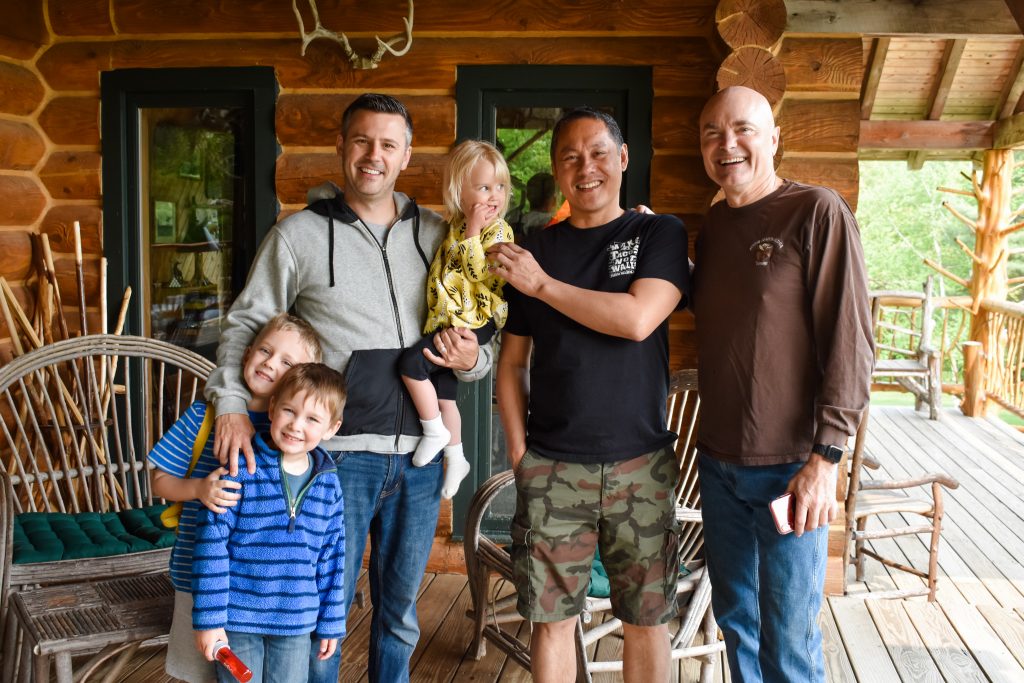 It was so good to unplug and be surrounded by nature in such a beautiful setting. Click here to book your stay at the Moose Meadow Lodge & Treehouse.

To read about all of the activities we did in the Mad River Valley, click here.

Disclaimer: we were given a free stay in return for a review. All opinions are my own. 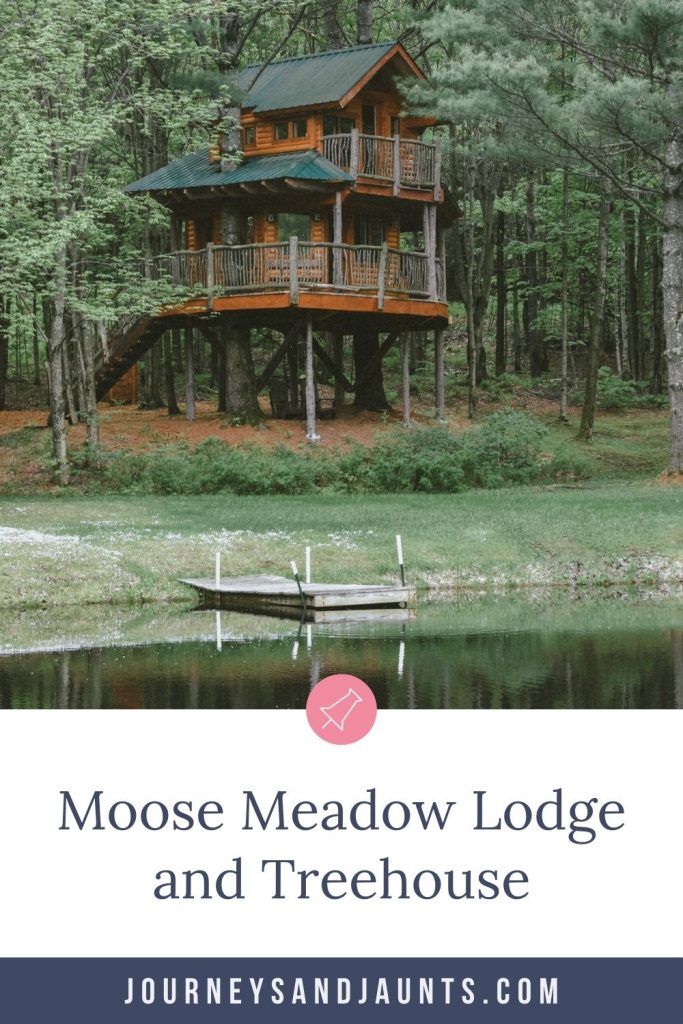 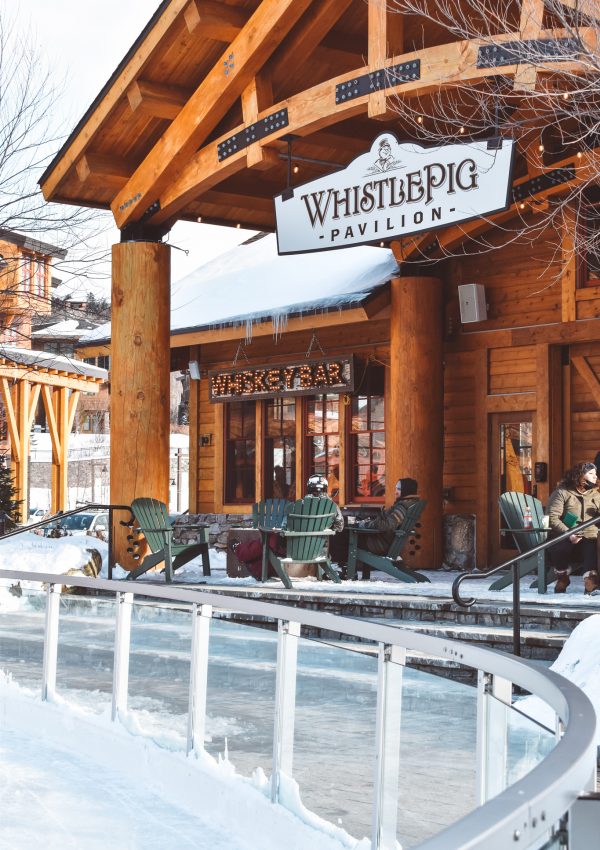 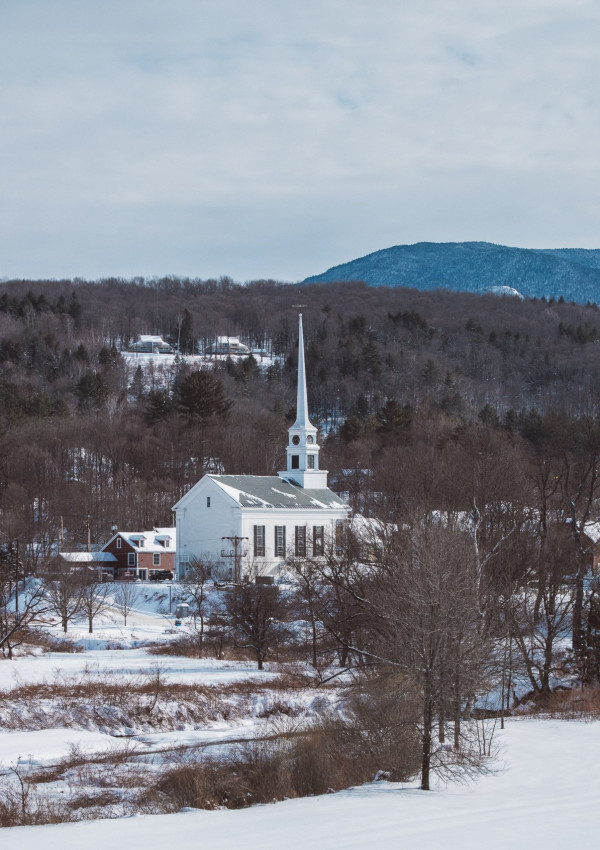 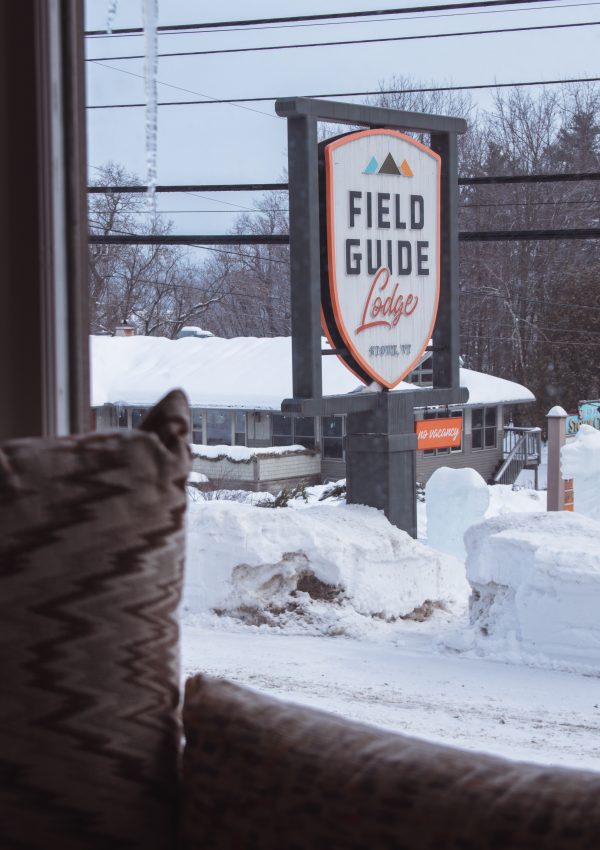 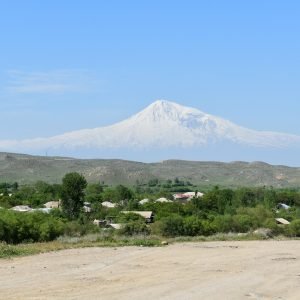