You are here: Home / Uncategorized / Losing Katouche- a sad update

When choosing a honeymoon location, animals were already on my mind. After traveling through Asian countries, I experienced the helpless feeling of finding an injured animal and not being able to do anything for them. We considered Greece, but I knew I would drive James crazy collecting kittens and puppies as we walked down the street. When my husband suggested Anguilla, I googled “animal shelter,” and found AARF. “Let’s book it!”

We were walking up to Elvis’s Beach Bar on the first night and James said “There are dogs over there, are you going to be ok?” I shrugged and said I would be fine. Within five minutes, I had adopted a dog. It was love at first sight.

Katouche had shown up at the beach bar a week before. He was starving and covered in fleas. I could barely pet him, because he was so scared. I sat in the sand, and he walked up to sniff me. When I reached out to pet him, he ran. He was just as afraid of being alone, so as soon as I turned around, he would sneak back to lay beside me. 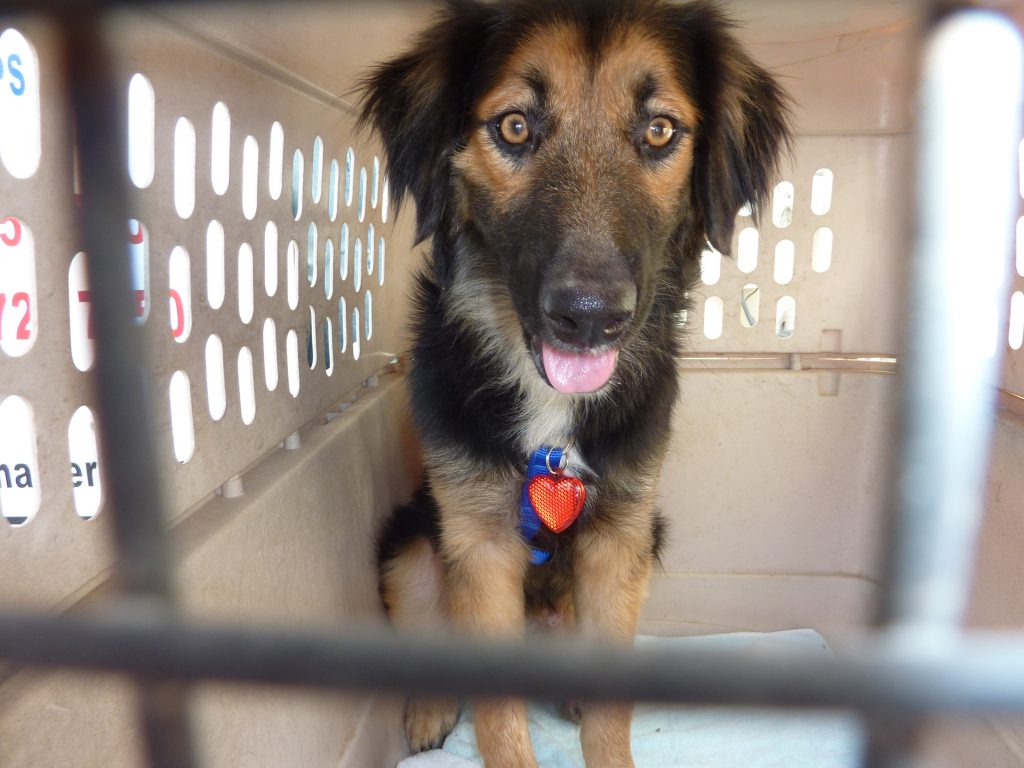 A nice couple told me he was going to be picked up by the shelter the next day. There was a trap set for him. I gave them my email address and asked them to pass it along to the shelter staff. I heard from Suzie the following day and took a taxi over to the shelter.

Anguilla is a tiny island, only 3 miles wide. There were more dogs than there were homes. Puppies were given 2 weeks to be adopted before being put down. Adults were usually euthanized straight away because they were usually heartworm positive. Katouche was the oldest dog there and didn’t stand much of a chance.

I spent a lot of time sorting details and was quite sure my husband would divorce me before we reached US soil, but Katouche soon stole his heart as well. Suzie bent over backwards to help me get Katouche home and we couldn’t have done it without her. Getting him home was a story in itself, but by some miracle it happened. 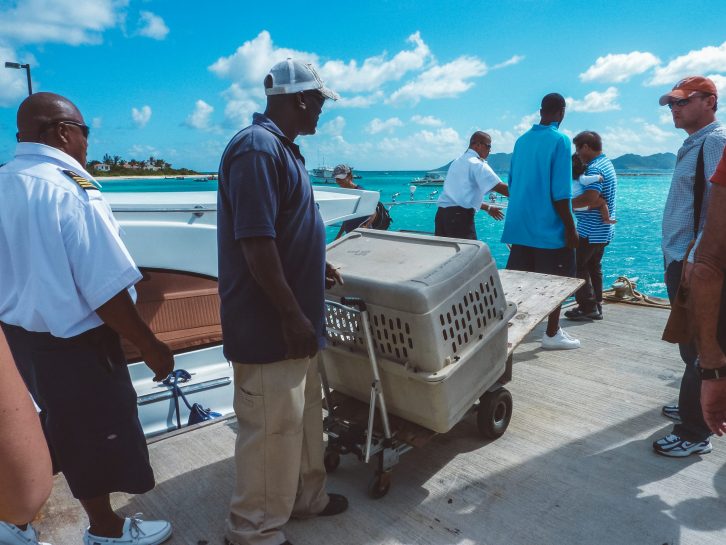 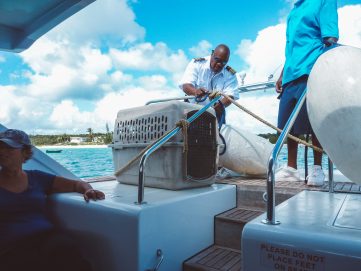 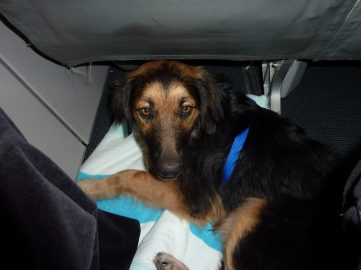 My initial plan was just to get him home safe and find him a home, but we were meant to be together. And for a dog that had never been inside of a house, he was so well behaved. We were inseparable. For 12 beautiful years, he didn’t leave my side. He came to work with me every day. I planned trips for just the two of us. He was the reason I laced up my boots everyday. He soon welcomed our three children into the world. He still loved me as a changed from a vivacious young girl to a tired frazzled mother. 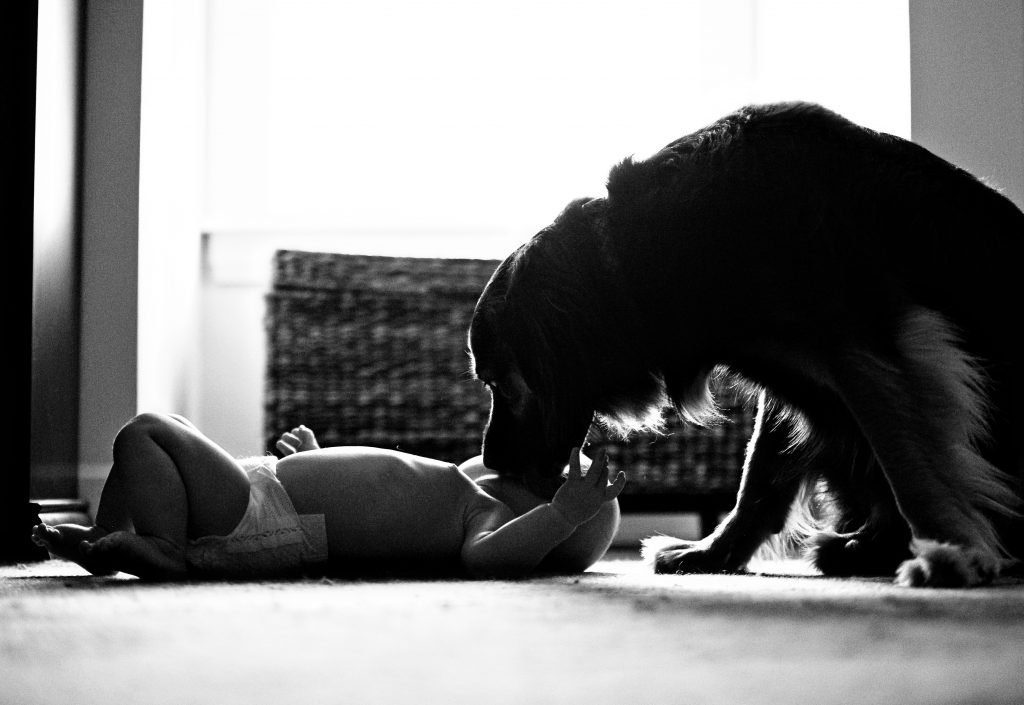 I used to go to bed at night with Katouche curled up at my feet and Bruiser in my arms and wonder how I got so lucky. I had this amazing bond with them and it made me so happy. But in January of 2022, Bruiser became very ill. After a week at the vet, his little body couldn’t fight any more. I was devastated. That afternoon, Katouche just happened to have an annual scheduled. The only thing they gave him was a leptospirosis vaccination, which I shouldn’t have let happen, but I was just trying to get out of there before I burst into tears.

From that moment on, Katouche’s health began to disintegrate. He started vomiting and the hair on his front legs fell out. I brought him back to the vet and they agreed he had some sort of allergic reaction. The next three months were absolute agony as I watched him get sicker and sicker. I felt so helpless. I spent so much money on specialists just searching for answers.

Katouche began yelping when he stood up. All of my late night google searches told me that he could have slipped a disc in his neck which is really painful. An orthopedic specialist was recommended but he couldn’t find anything wrong with him. Tufts wouldn’t even return my calls. In my frustration, I drove to an ER in Rhode Island. They brought him straight in for a MRI and spinal tap. I couldn’t even drive home. I just paced nervously for hours. 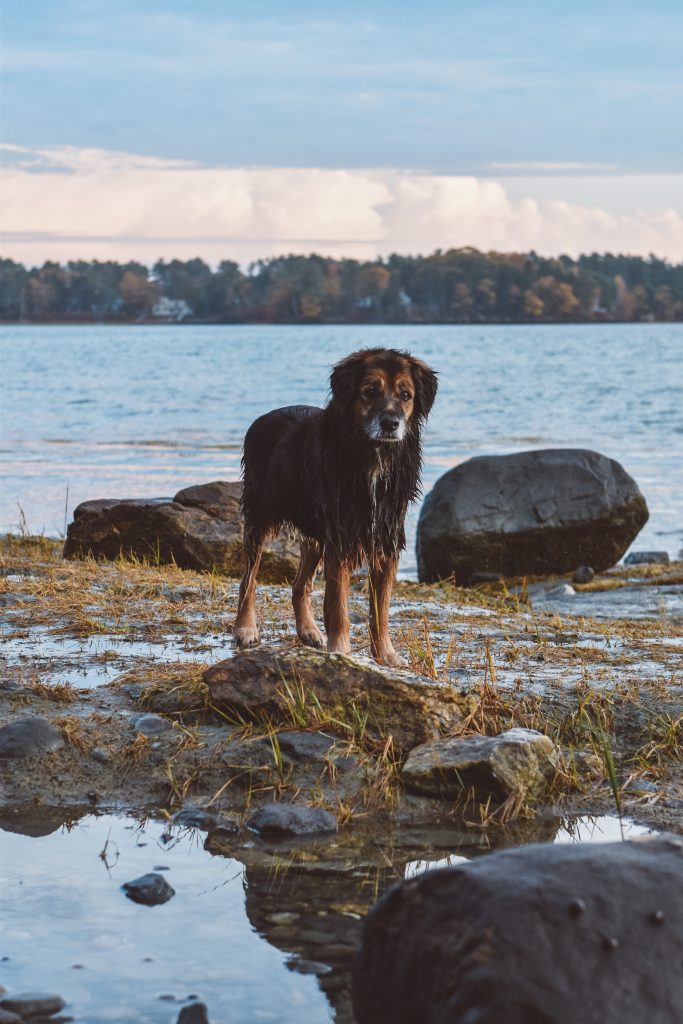 The vet came out to tell me that his spine was perfect. But they did find a mass in his lymph node that was the size of a golf ball. One of his tonsils was also enlarged and irregular. They sent samples out for a biopsy.

Days went by with no word. I emailed my vet with an update and was surprised when they said they had seen the report and that they were so sorry. I asked them to send it to me. When I saw those words “metastatic carcinoma” my whole word began spinning. I had called the specialist that had done the tests multiple times. I was livid. He had had the test results the following day but waited a week to call me back.

Katouche was in so much pain despite being on three different pain meds three times a day. It was so bad in the morning, that I used to lay in bed and not want to get up. Katouche always waited for me and I knew the second he moved, he would be crying out in pain. I even tried getting up in the middle of the night to give him more pain meds. I switched him to soft food and did whatever I could to make him comfortable. But soon, he struggled to stand without screeching in pain.

I couldn’t even imagine my life without him and suddenly I was facing the reality that I was losing him at the same time as Bruiser. My heart couldn’t cope with it. I shut down completely. There wasn’t a day that went by that I didn’t cry. I arranged for the vet to come to the house. I didn’t want his last moments to be scared or stressed. Watching the kids say goodbye to him before they left for school was heart wrenching.

I got him his favorite little container of cream cheese from Panera. He was so busy licking it, he didn’t even notice the vet crawl under the kitchen table to administer the sedative. He fell asleep with his head on my lap and I told him what a good boy he was and how much I loved him. It couldn’t have been more peaceful. He was in his favorite spot with his favorite people eating his favorite treat. No more pain, no more procedures, no more meds.

I heard him take his last breathe and walked out of the room. I had tried to be so strong and held it together because I didn’t want him to be scared. But once he was gone, I completely fell apart.

And just like that, our time together was over. I didn’t even see it coming.

I still can’t believe he is gone. I couldn’t put his water dish away for a month. I still hand food under the table and look for him in my rear view mirror. It’s such a profound pain that isn’t shared with anyone else, therefore nobody else will ever understand. While most people are thinking “It’s just a dog,” I feel like I have lost a child. He was my constant companion, and I now I just feel sad and alone. The hardest part is knowing there will never be another dog like him. 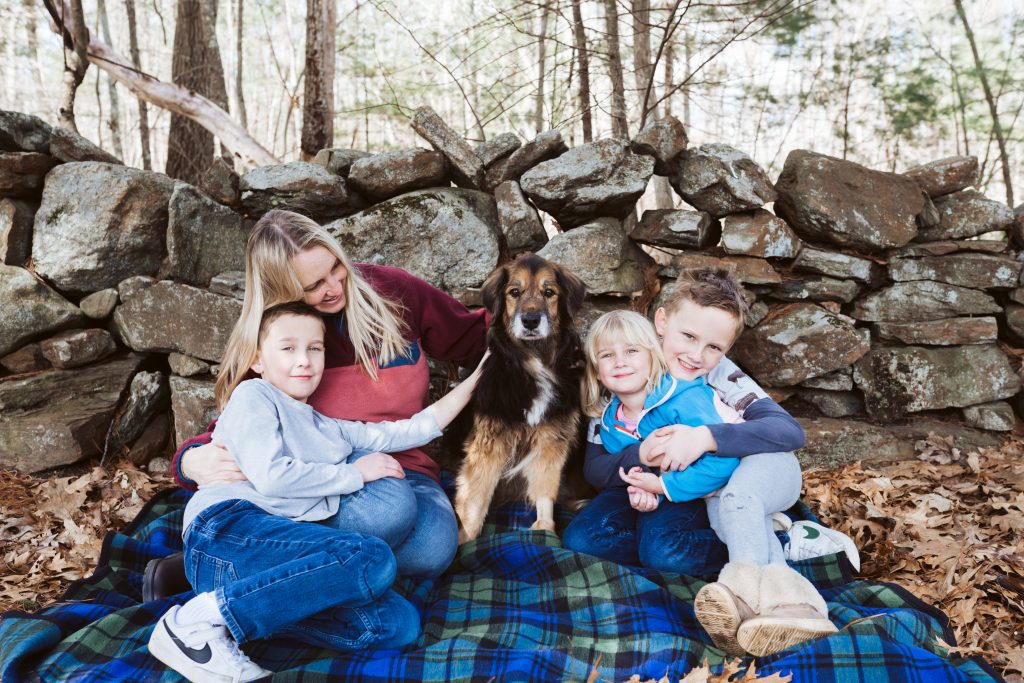 I left for Peru just days later. I hoped getting out of my comfort zone would get my mind off it and help me heal. I brought along their ashes and sprinkled them along the Inca Trail. One last walk together.

Things were bad again as soon as I came home. It’s like I keep falling down this dark hole. I almost make it out. I’m dangling from the edge. I can see the light, but then someone comes over and steps on my fingers so I have to let go and fall again. I’m just not in a good place this year. This is the first time I have written anything in months. And my last post was about my cat dying. But I am trying.

I guess there will be a bit of a lull in dog friendly content, though I can’t bare to take his picture off the website. Of course, we will adopt another dog. But my heart is not ready. To see the story of Katouche click here and to see how beautiful of a life we had together, click here.

Rest easy, my boy. Gosh I loved being your mom. 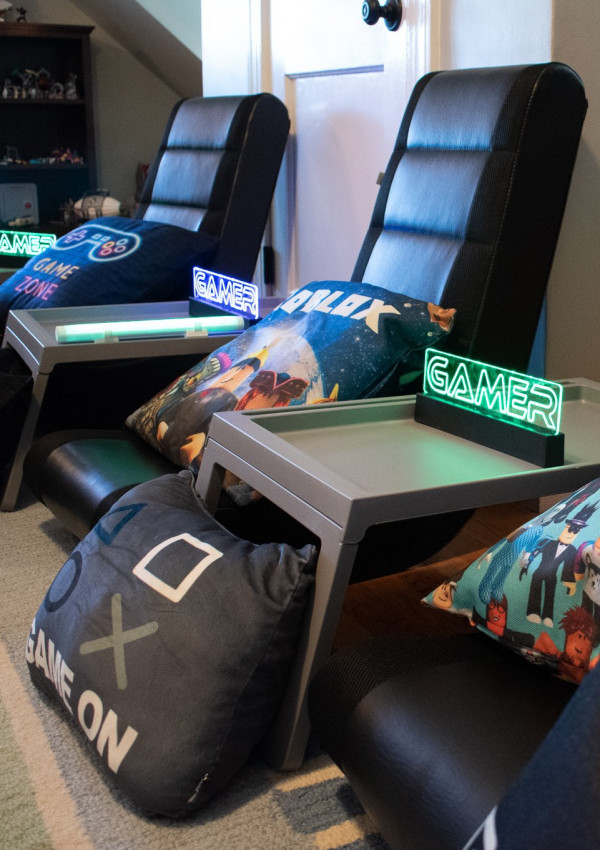 Setting up a Boy’s Sleep Over with Slumber Squad 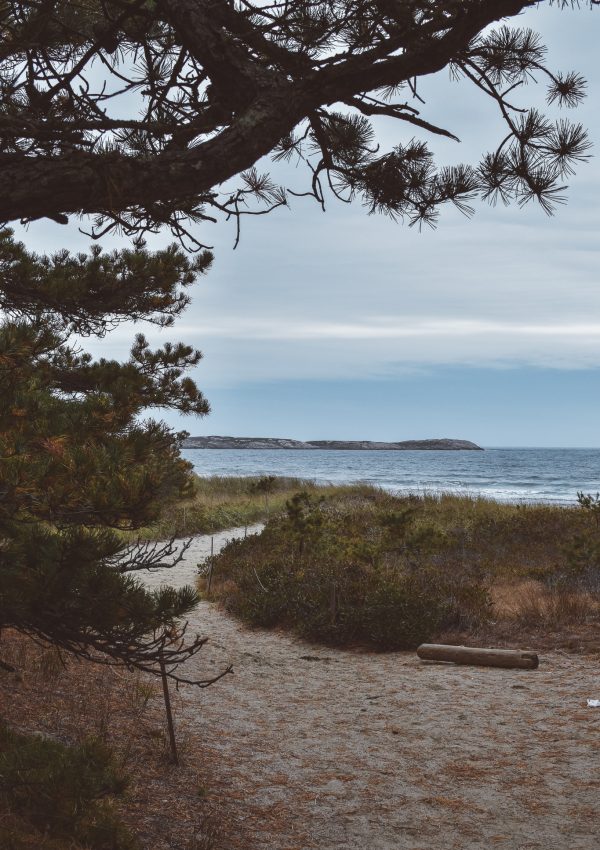 The Best Things to do in Phippsburg, Maine 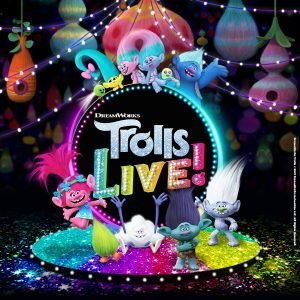 Trolls LIVE is coming to the Hanover Theatre- Win tickets!