The only time I felt unsafe during my time in Nepal was driving down through the Himalayas to reach Chitwan National Park. I looked at the map on google earth and it was just a scribble because you have to zig zag through the mountains.

It is incredible to think that it is a major trade route between India and Nepal and half of it is not even paved. The road is about a lane and a half wide and yet you have trucks trying to overtake you on blind hairpin turns.

We stopped for lunch along the way and while the food was good, the bathrooms along the route are pit style and unhygienic. As we drove,  we played “count the lorries” as we spotted the upside down cars and trucks at the bottom of the river bank.

There were rarely any guardrails and the giant tour bus we were in would sway over the edge. We saw a motorcycle accident on the way and there was no way the man survived. This poor man just had a crowd of people around him watching helplessly. There was no ambulance to call and the nearest hospital was hours away. His legs were sticking out from the crowd and the way they were shaking, things didn’t look good. Needless to say, my anxiety was off the charts. The drive was so stressful, that half of the people on our tour refused to do it again and chartered a plane and flew back! 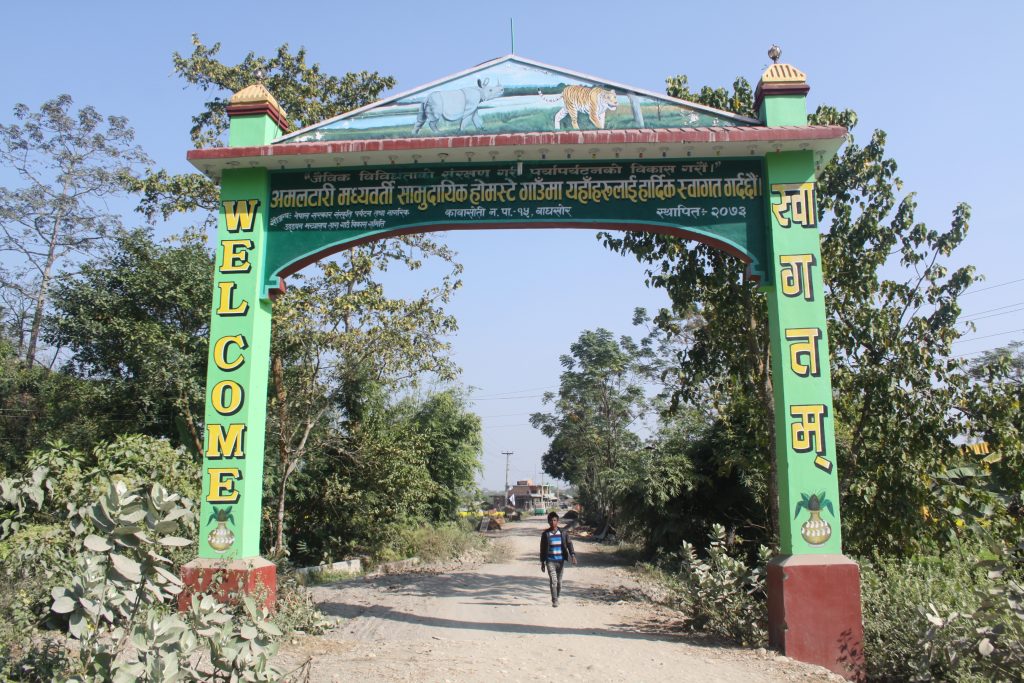 After 7 long hours, we reached the park. We were greeted by singing women who draped flowers around our necks. There are two lodging options at Tiger Tops. The main lodge has beautiful grounds and is a bit like glamping.

Since we were on a charity trip, we opted for the home stay, which is located about a 10 minute walk through the fields. The Amaltari Bufferzone Homestay was created to bring income to the local families. There are small apartments attached to each home and the family provides you with meals.

At first I was disappointed to not be in the main lodge, but it was such a wonderful experience to see what life was really like there. Our family was so kind and we loved the food. We ate in a large metal gazebo to keep us safe from the tigers and they even had WIFI. 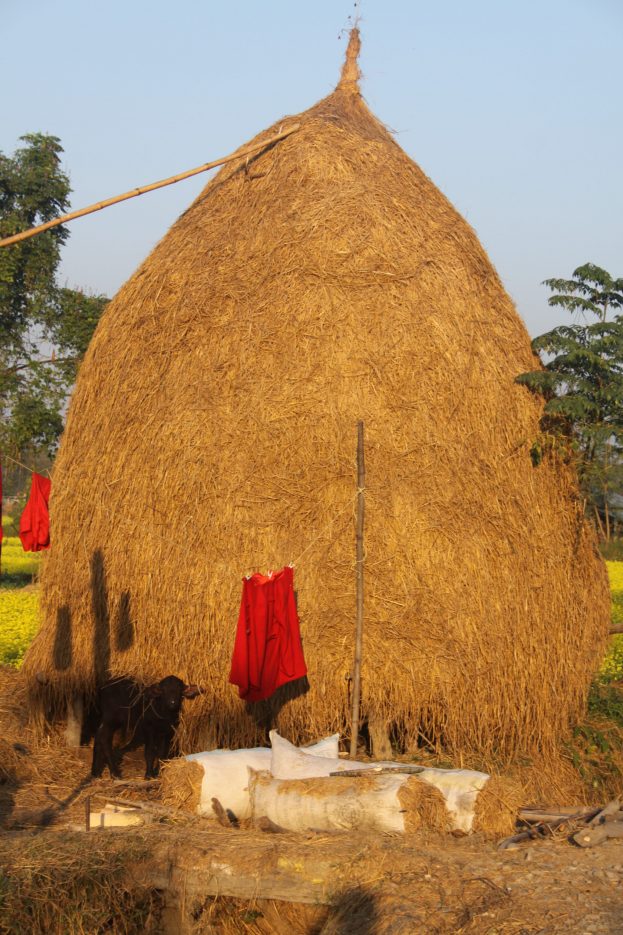 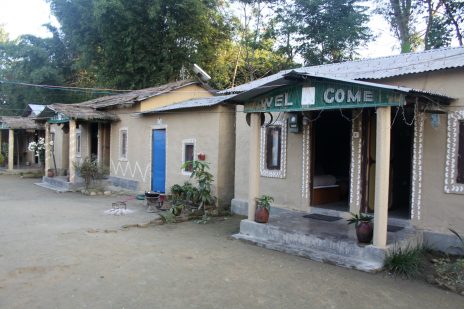 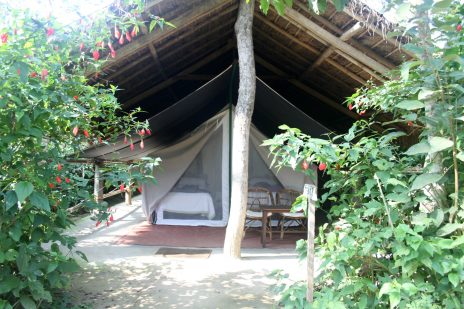 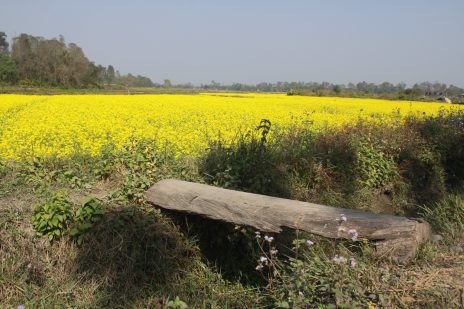 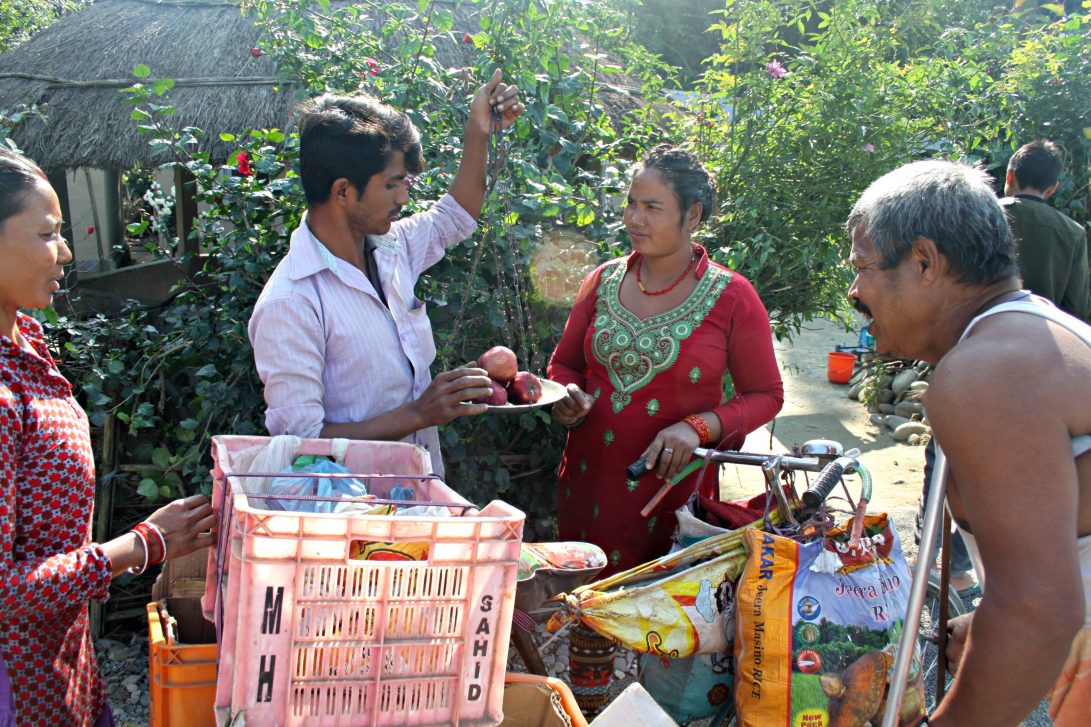 The first night, we walked through elephant camp to learn about their responsible approach to elephant-based tourism. Tiger Tops has stopped all elephant rides and instead, you can walk through the forest beside the elephants. Although elephant rides have become very popular, the training techniques are very cruel and you have to be careful not to support it. We saw elephants walk past us with up to 6 tourists on their back and their legs in chains and it was heartbreaking. Tiger tops is leading the way to more humane wildlife tourism. 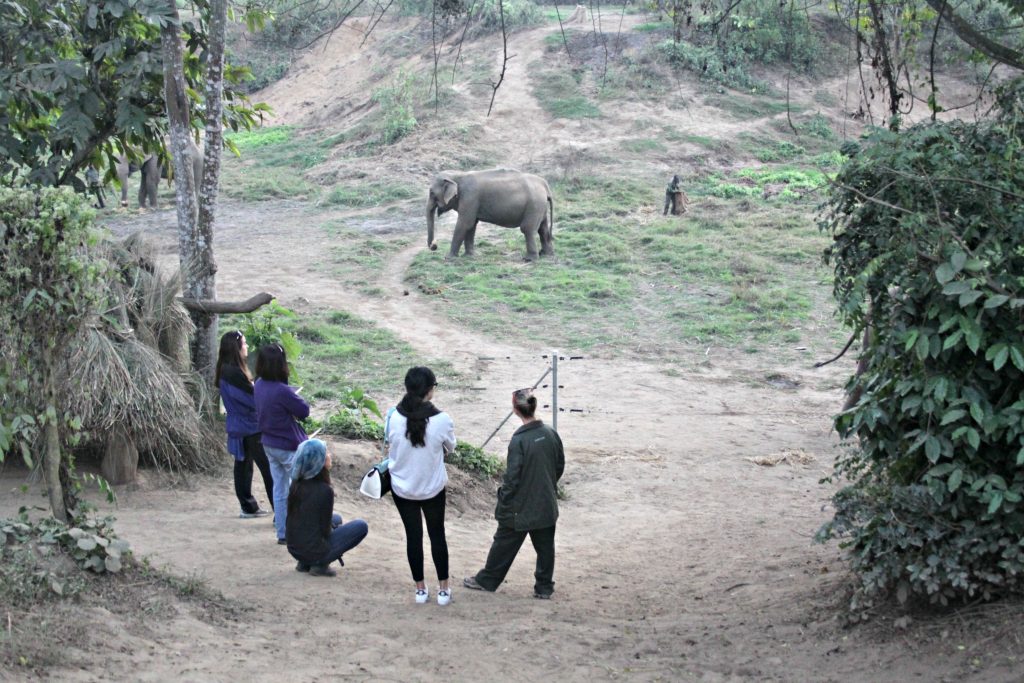 Chitwan is the most ecologically significant national park in Nepal. The park is home to over 120 Bengal tigers, 600 rhinoceros, wild Asian elephants, sloth bears, gharial crocodiles, all of which are highly endangered. The park needs funds coming in to be able to protect the habitat of endangered species and pay rangers to patrol the park to combat poaching activities. 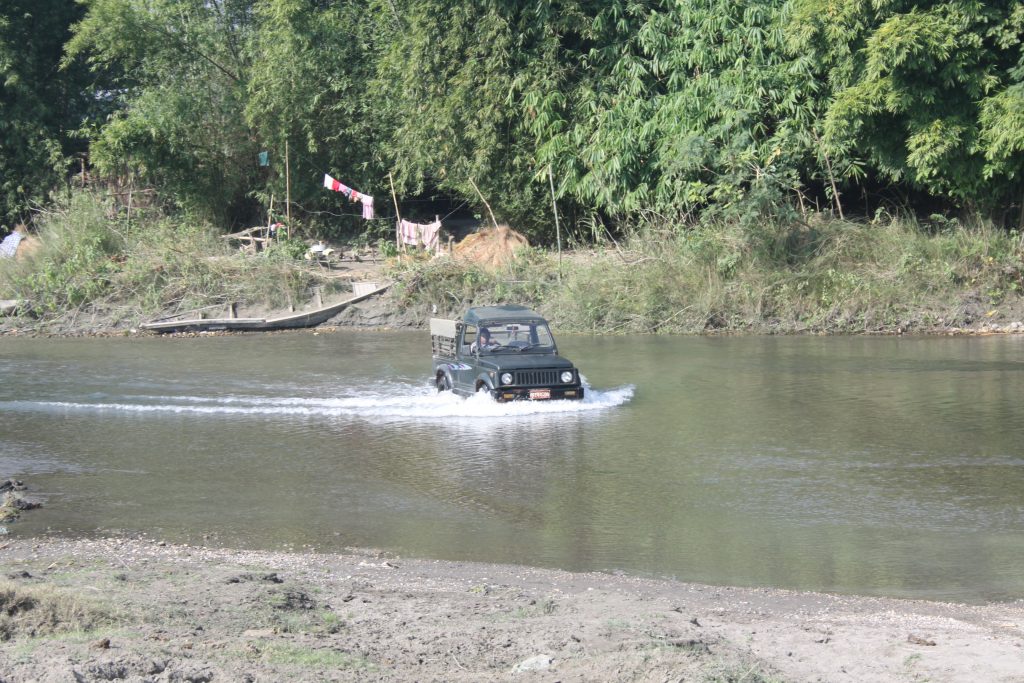 After our tour through elephant camp, we sat by a campfire and had a drink. The local people came out in full costume to put on a cultural performance for us. We watched them sing and dance and even got to participate. 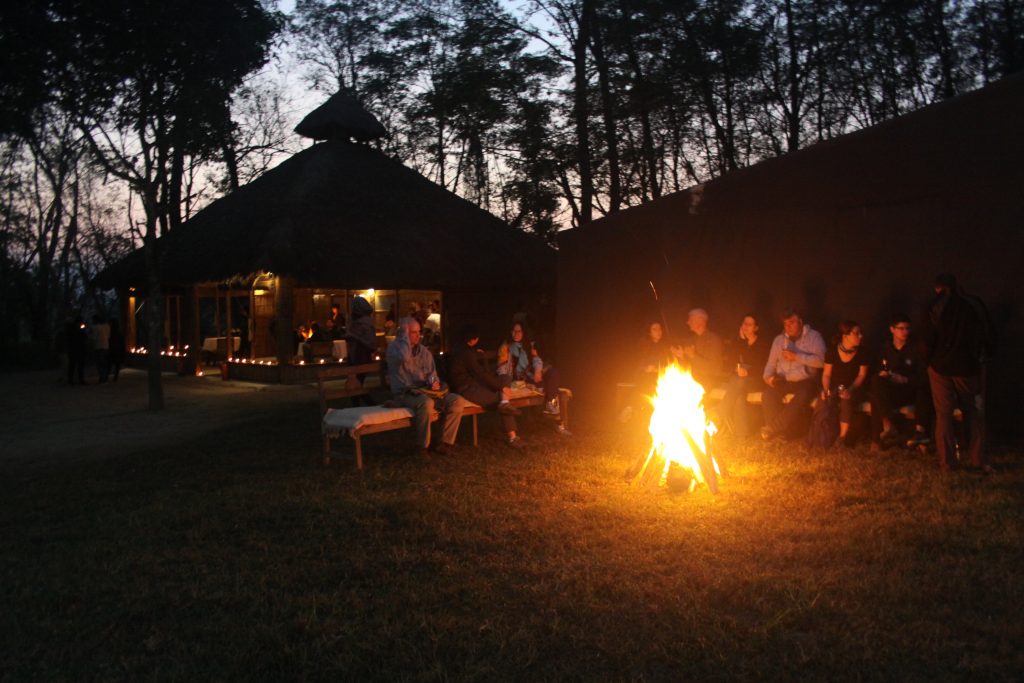 The following morning, we were assigned to a group and set out into the jungle for a trek. If the elephant found something she wanted to eat, she would simply rip the entire tree out of the ground and nibble on it as she walked. We approached a clearing and there was a rhino feeding just 200 feet from us. As the rhino shifted her position, we saw that her calf was beside her. It took my breath away. I could have stayed there all day just staring at them.

As we moved on, we crossed a dry riverbed and found fresh tiger tracks… and not only one tiger, but a mother and her two cubs! It is very rare to see a Bengal tiger since there are so few of them left so the paw print was really exciting. The scenery was so beautiful and it was just so exciting to hike there, not knowing what was lying around every corner. There were loads of different species of birds and although I heard a great hornbill, I never saw it. 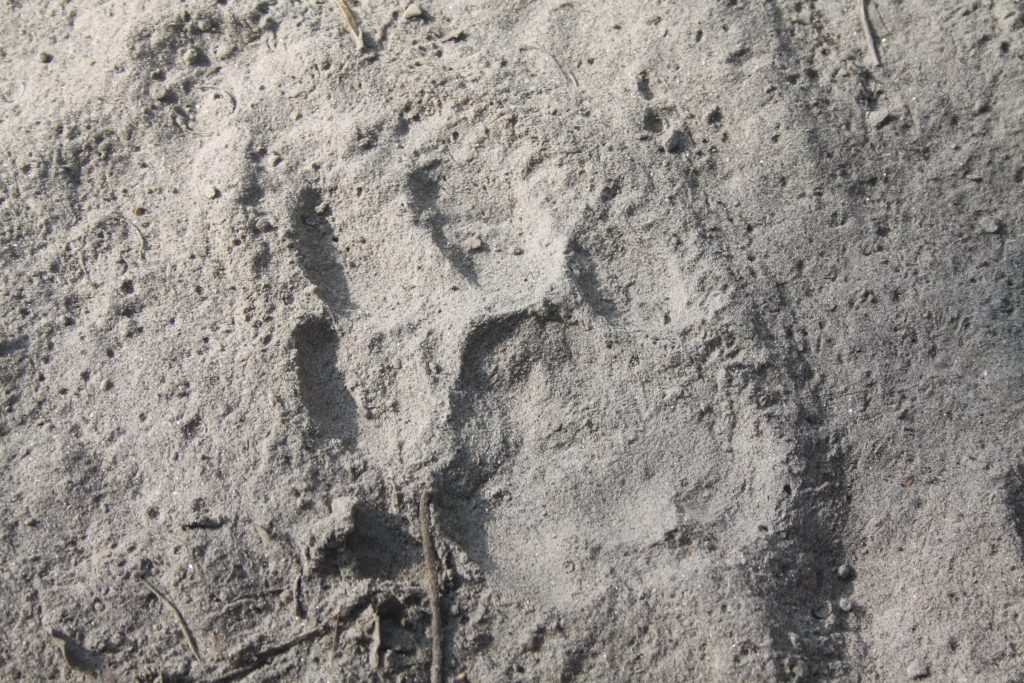 That evening, we watched the elephants swim in the river as the sun set. They were so happy spraying water out of their trunks and fully submerging their giant bodies. KAs magical as it sounds, it was really sad to see all of the plastic bottles and trash that would float past. It really ruined a beautiful moment.

Since the bus ride took so long to get back, we had to leave early the next morning. It was not nearly enough time to explore and I would recommend a minimum of 3 days if you want to see wildlife. It took us 10 hours to get back due to traffic. Be sure to never plan to be back for a certain time. 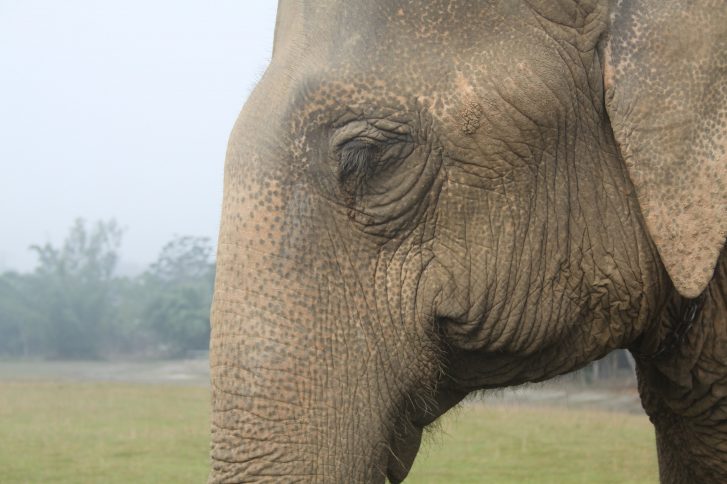 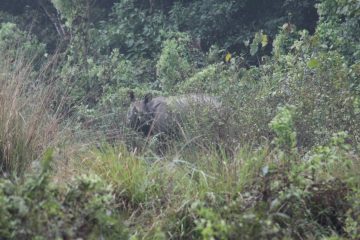 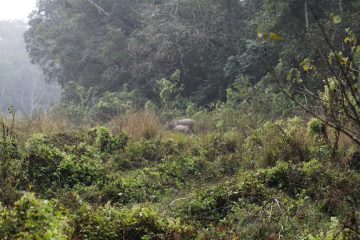 I hope that Chitwan National Park is able to figure out how to support itself so that the wildlife within stay safe and protected. It is such an important piece of land. Just know that by visiting the park, you are supporting conservation, helping protect endangered species and even helping the local community.

My return to India 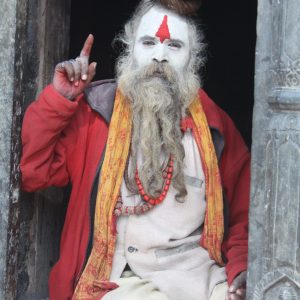