You are here: Home / International Travel / The best sites to see in Kathmandu, Nepal

Earlier this week, I wrote about my new found fear of traveling. It’s strange to be afraid of something you love! In the end, I loved my trip to Nepal and was so glad that I went. The beautiful people, fluttering prayer flags and majestic wildlife will always hold a special place in my heart. Here is a list of the places and experiences you should not miss on a trip to Kathmandu.

This neo-classical historical garden lies in the center of the city providing a peaceful respite. There is a cafe located inside and many people lie on blankets in the lawn. There are exotic plants and interesting statues to look at. We spent less that a half hour here, but it was a nice place to walk around. 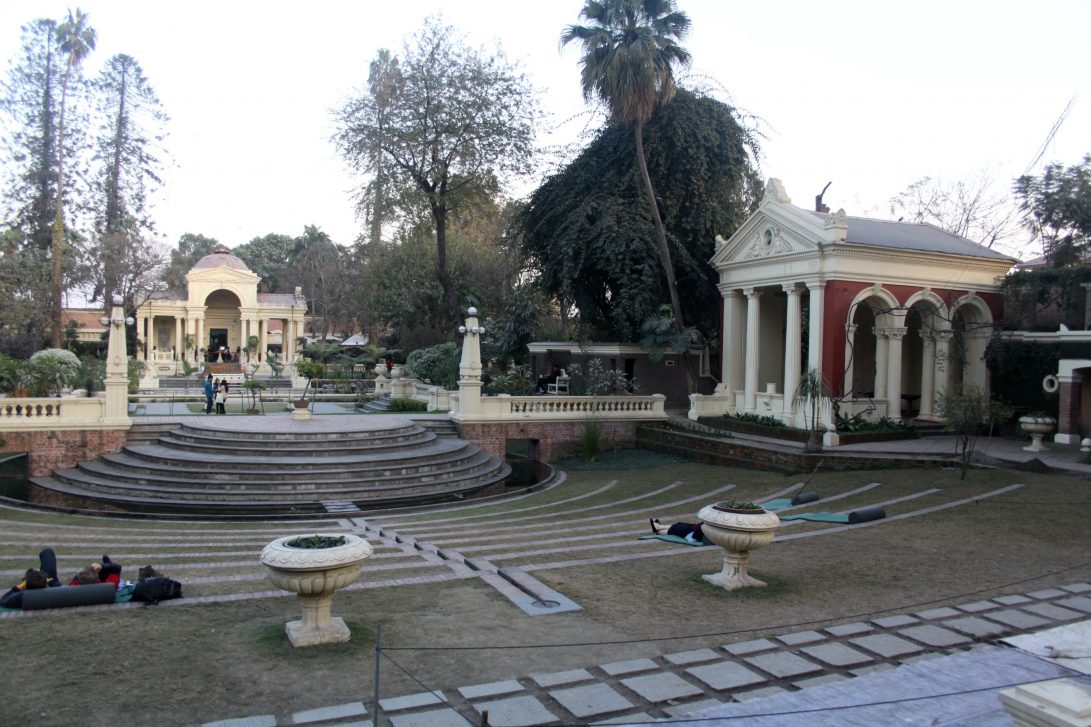 Arriving at the ‘Monkey Temple,’ you can instantly see how it got its nickname. There is a long steep staircase leading up to the temple but it is worth the trek for the view. I loved watching the local people do their religious ritual of walking in clockwise circles around the stupa, spinning prayer wheels as they go. 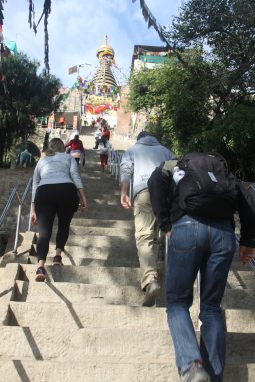 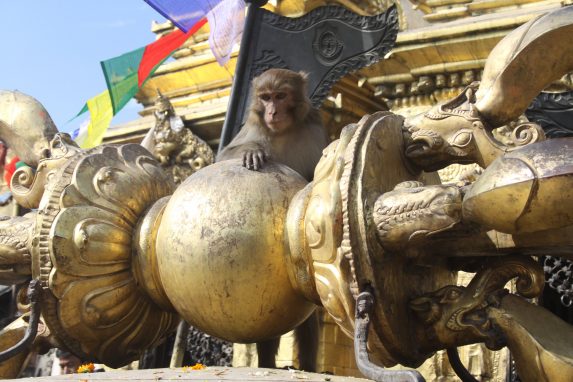 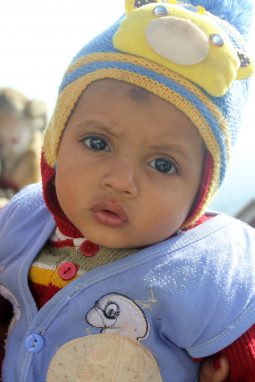 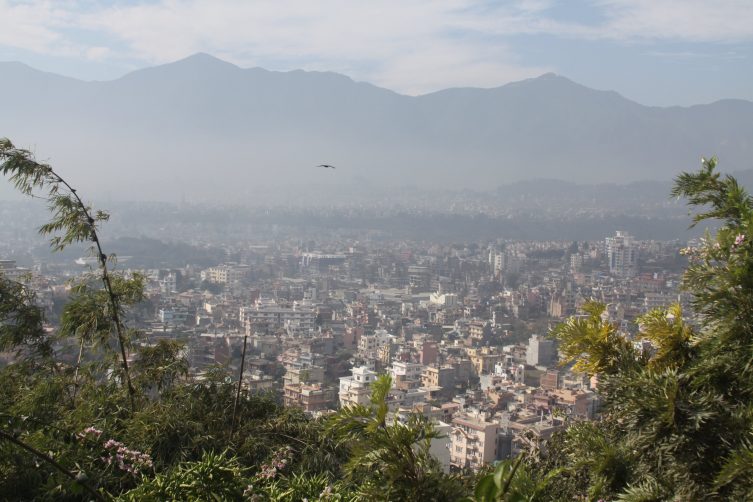 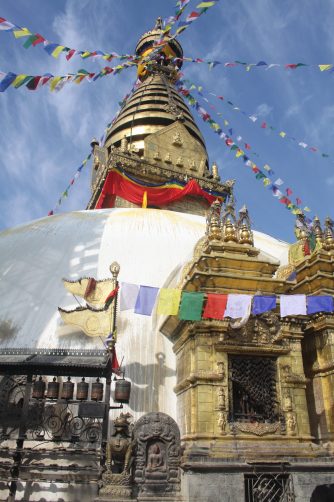 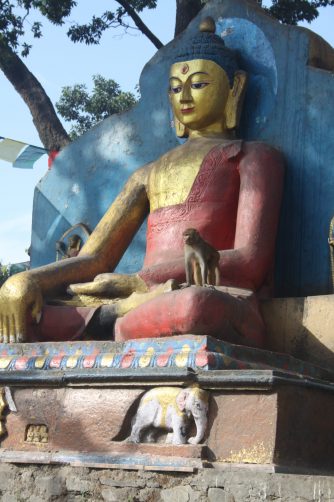 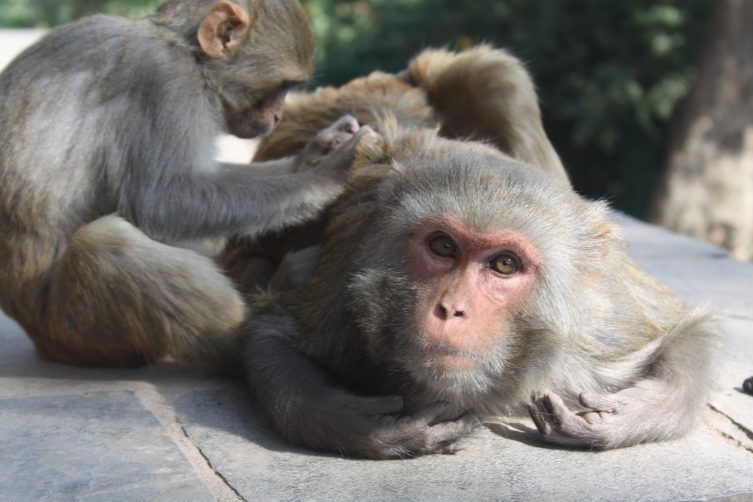 From Swayambhunath, we took an inexpensive taxi to Pashupatinath which is an important Hindu Temple along the banks of a sacred river. You have to be Hindu to enter the main temple, but there is an area for tourists to watch. It felt obtrusive being there, watching people in their most vulnerable moments of cremating a loved one. Be respectful and don’t take pictures. There are ceremonial ghats along the river where a body wrapped in shrouds would be laid. The family gives their last respects before it is lit on fire. It takes hours to burn and there is a man with the job of turning the body as if it were firewood. The ashes are then swept into the holy Bagmati River.

With a hospice located just inside, there was usually a line of bodies waiting for an open ghat. It is a part of their religion to be cremated within hours of dying. It was so intriguing to see and felt strangely natural compared to our tradition of pumping bodies full of chemicals and putting them in an expensive box. Across the river, there were sadhu men dressed in full ceremonial garb wanting you to take a picture with them for money. 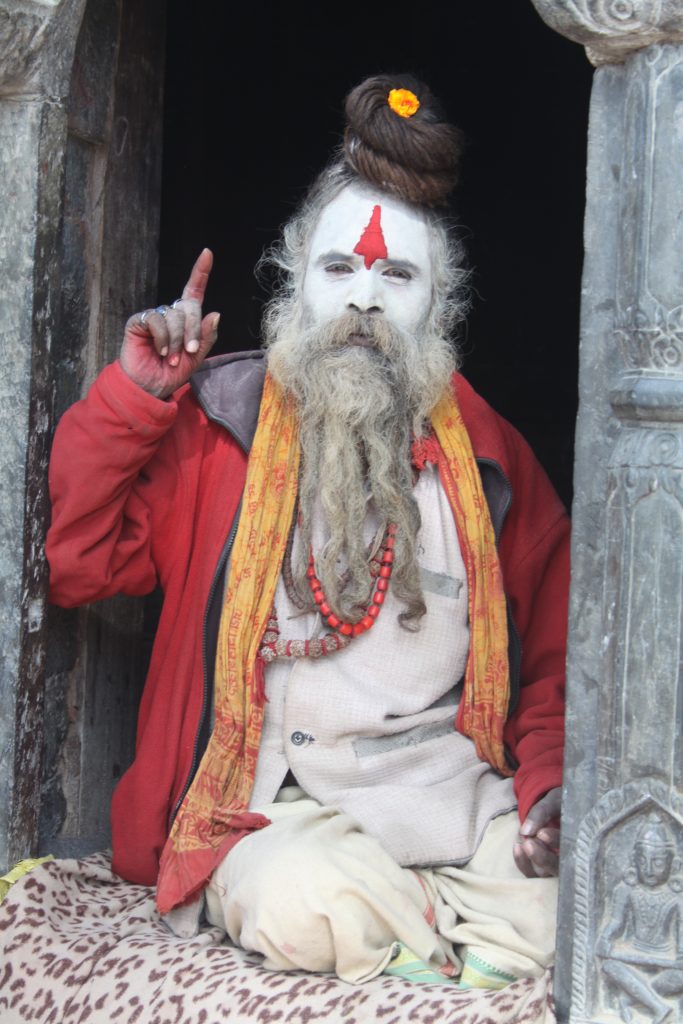 Exiting the back side of Pashupatinath, we could see Bodnath towering over the city. Unfortunately, this is the closest we got to the largest stupa in Asia. Do visit if you can. This beautiful temple is very important to the Tibetan culture and is covered in monks donning maroon robes. 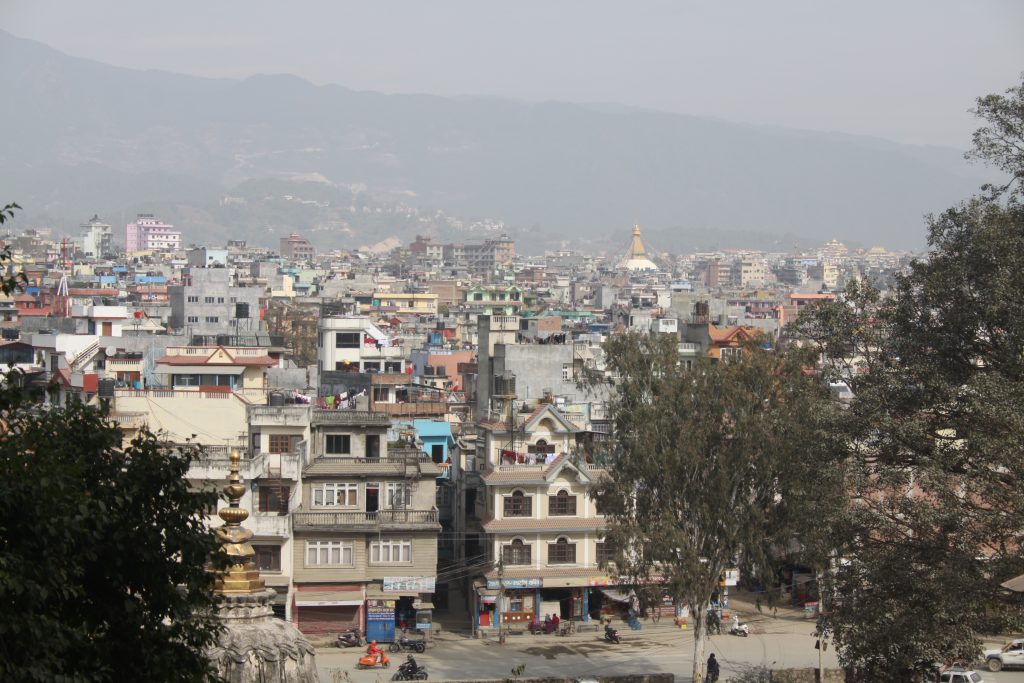 Sadly, this is where you will see the greatest extent of earthquake damage in Kathmandu. Within moments of the first tremor of the 2015 earthquake, these ancient temples and monuments were reduced to rubble. Most interesting is the palace of Kumari, Nepal’s living princess. It was one of the only buildings that came out unscathed. A priest said, “It’s been the home of Kumaris for ages and we believe the force of that goddess made the house safe.”

It is a Hindu tradition to worship young, pre-pubescent girls as manifestations of the divine female energy or Devi. Little girls as young as 3 years old have been taken to the Royal Court to be inspected for 32 characteristics of physical perfection such as a neck like a conch shell, a body like a banyan tree, and eyelashes like a cow. Once chosen, the Kumari’s walk across Durbar Square is the last time her feet will touch the ground. She will be taken from her family to live in the palace. She can only go outside 13 times per year and when she does, she will be dressed in elaborate makeup and carried since her feet can not touch the ground. She is considered so sacred that crowds of worshipers will swarm her palace and wait below her latticed window in hopes of even a glimpse of her.

Unfortunately for the Kumari, the day her menstruation begins, it is believed that the goddess vacates her body and she is now just a mere mortal. She must leave the palace and return to normal life. While I am all about female empowerment, I can’t imagine what a toll that is on young girls to grow up being worshiped and then it just ending so abruptly.

The most interesting shrine I visited was Maru Ganesh also known as Ashok Binayak. Ganesh is known as the conqueror of obstacles and this shine is popular with trekkers because it is believed that a visit will ensure safety on a journey. Devotees walk around the shrine three times, ringing the bells as they go. Also look out for the deity’s gilded attendant, a small mouse who acts as the vehicle of Ganesh. This bronze statue sits across from the shrine, it’s nose polished clean from people rubbing it for good luck. 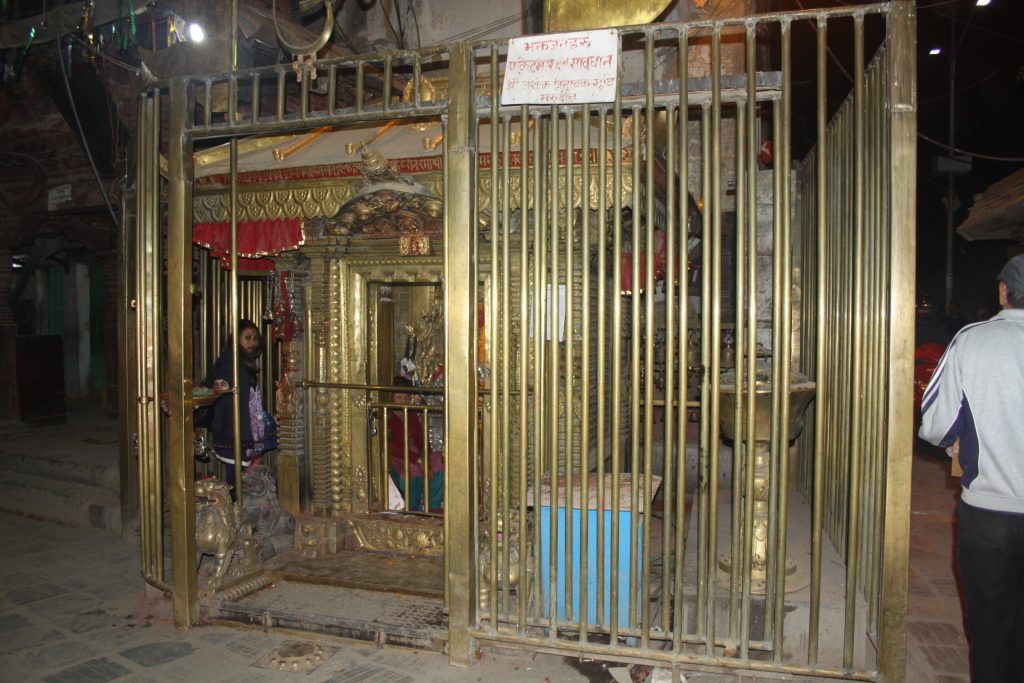 Momos are steamed dumlings with either vegetable or meat filling. Word on the street is that the Yangling Tibetan Restaurant has the best momos in Kathmandu. I walked down many dark alleys to find this hole in the wall and it was totally worth it. The noodle soup (thukpa) was also amazing. Besides having a great meal that cost next to nothing, they let me peek in the kitchen and watch the momo making in action. 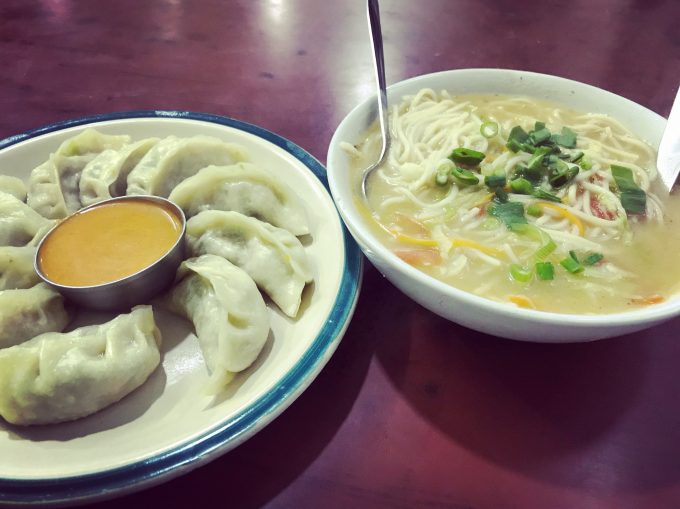 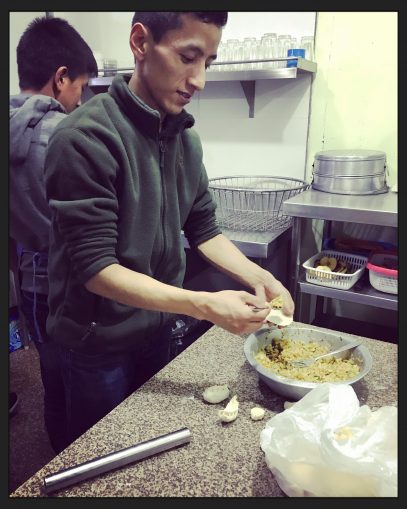 Kathmandu was like nothing I had ever experienced. I loved the people and the culture. After five days in the city, we boarded an early morning bus to Chitwan National Park for wildlife trekking. Click here to continue  reading. 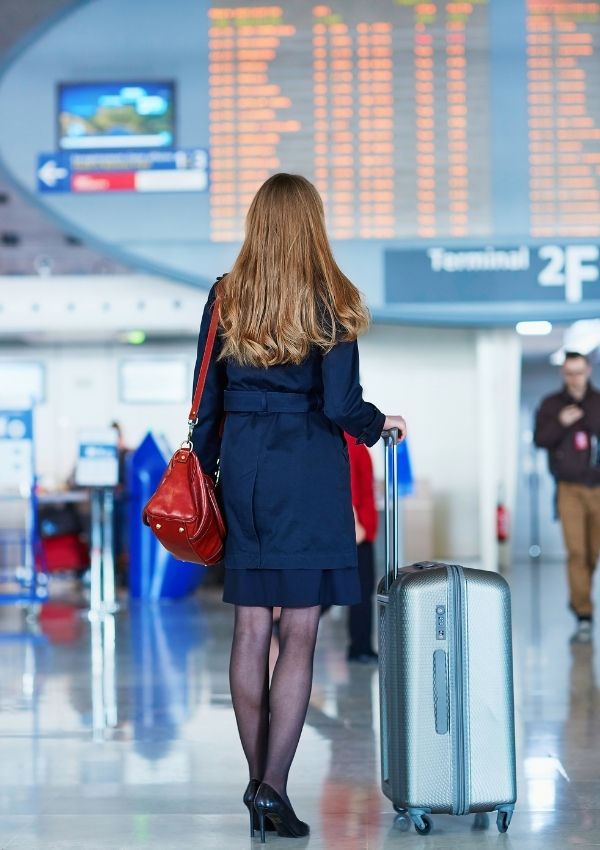 Important things to do before traveling internationally- with free printable 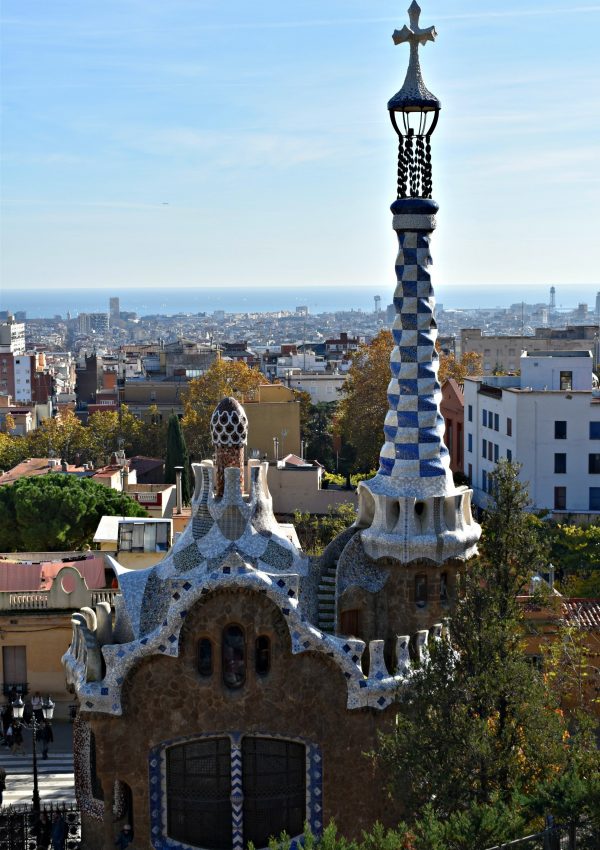 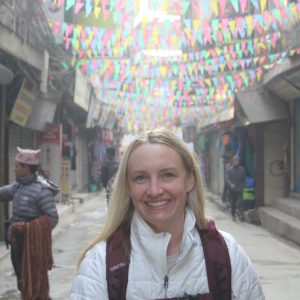