You are here: Home / Traveling with Kids / Visiting the American Heritage Museum

I’m going to be honest, the first time I visited the American Heritage Museum, I thought that we would be looking at a rich man’s collection of old war stuff in a garage. Wow, was I wrong.

I was pretty blown away by our experience the first time, so this Veteran’s day while looking for something meaningful to do with the kids, we decided to head back for another visit. 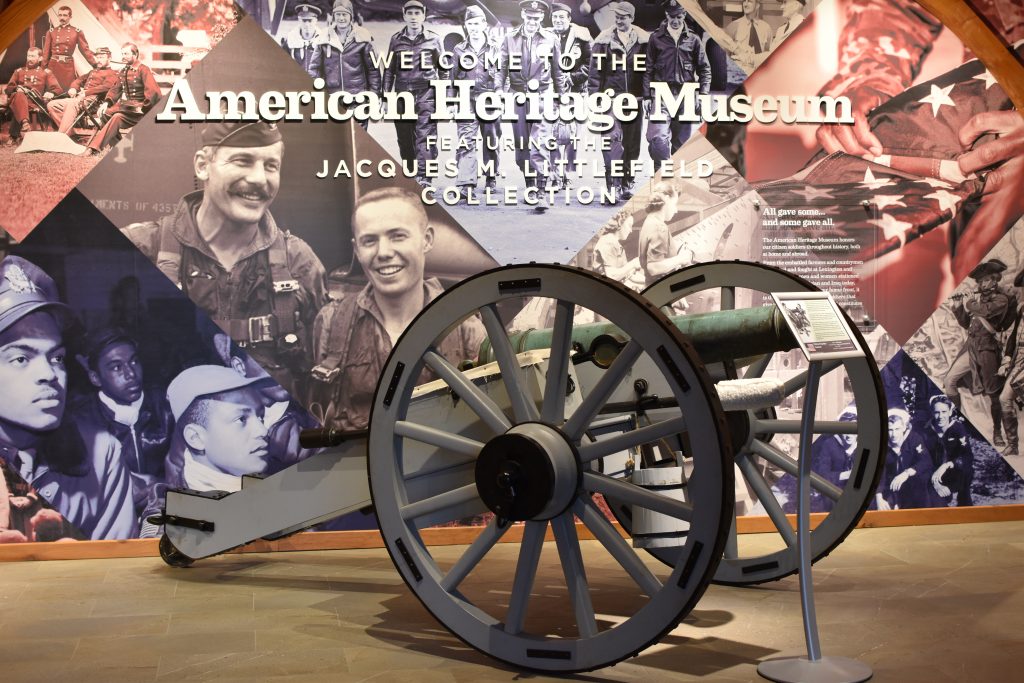 Jacques Littlefield graduated from painting model tanks as a child to amassing the world’s largest private collection of tanks and military vehicles in the world. Now that’s passion. Before his passing in 2009, he donated his collection to the Collings Foundation.

The American Heritage Museum is designed to fully engage people in understanding our turbulent past. On your self-guided tour, you will be led through the history of America’s conflicts from the Revolution to the War on Terror.

What I find really special is that all of the docents are Veterans and they are willing and eager to answer questions and tell their stories of service.

After a short film on the Revolution, we were led into a World War I trench to get a bird’s eye view of what it was like to be on a battlefield. While my boys thought the bombs going off was pretty darn cool, the flashing lights and shaking floor might be too much for young children. Either way, it is pretty eye opening to see what our Veterans went through to fight for our freedom. 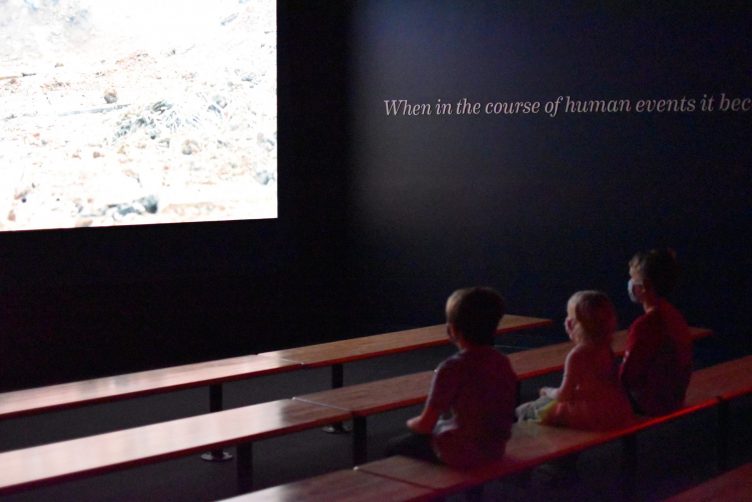 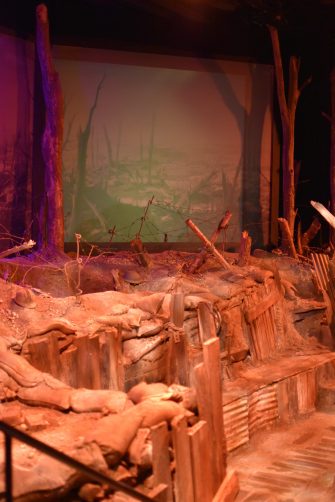 Next we learned about World War II and the rise of Nazi Germany through a series of chronologically arranged exhibits. The building is huge- over 65,000 square feet.

The collection of military artifacts ranges from a World War II era U.S. Army M3A1 wheeled scout car, a Soviet-era mobile Scud Missile launcher, a U.S. Sherman and Patton class; U.K. Centurion, Conqueror and Chieftain; German WWII vehicles including a Panther; and Soviet-era Russian tanks. Many of these tanks are the only one of it’s kind in all of North America. 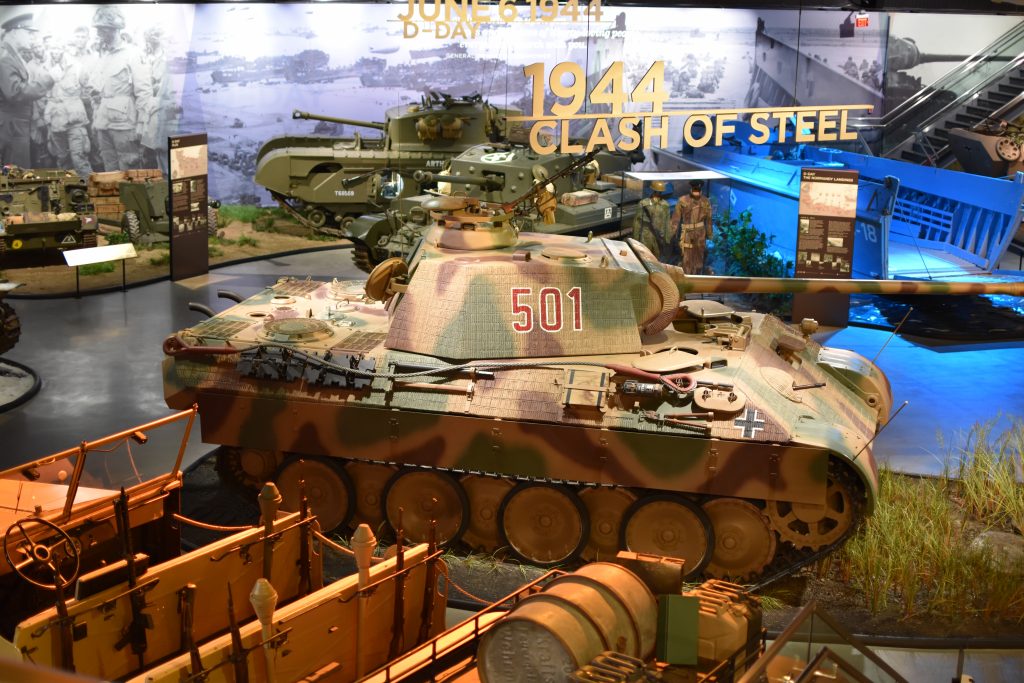 As we moved on to the War on Terror, I felt a lot of emotions since it was something I lived through. I remember that day like it was yesterday- the fear and confusion followed by utter sadness. It was the first time my boys were learning about 9/11. As a protective mother, I want to educate my children while protecting their innocence and found it such a challenge trying to explain it to them. 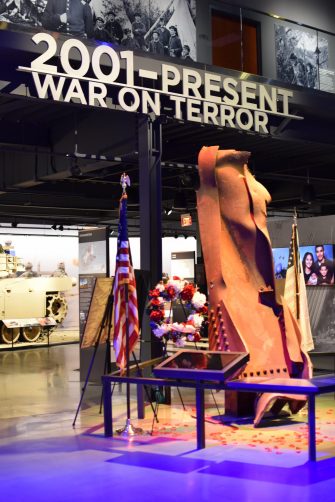 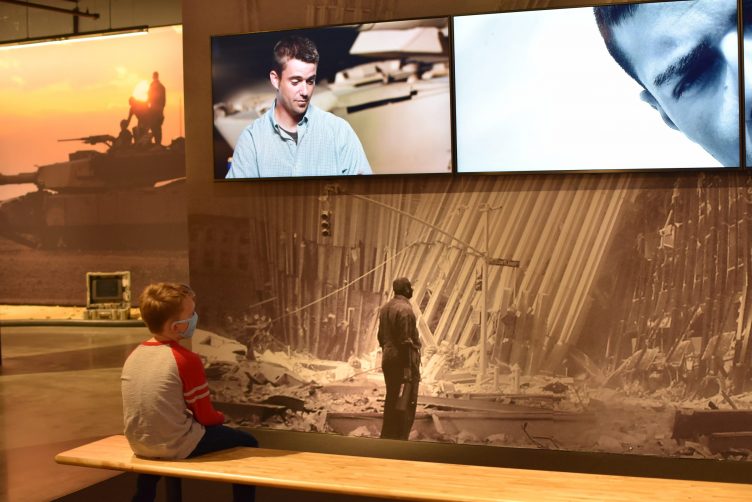 We sat for a short documentary told by Lt. Heather Penney and Lt. Col. Marc Sasseville and it was an incredible story I had never heard before. These two F-16 pilots head out of Joint Base Andrews in Maryland as soon as the towers were hit. Since they didn’t have the time to wait for missiles to be loaded, they set off with the intention of taking down the plane by flying into it. I can not even imagine the bravery involved in setting off on a mission in a moments notice knowing you wouldn’t be returning. Or to work out the emotions of taking down a target that held innocent people inside.

And on the other side, the people on United Airline Flight 93 had learned the news of the attacks and knew they wouldn’t be landing safely. Instead of sitting back, Todd Beamer famously said “Are you guys ready? Let’s roll!” and with that, every day civilians stood up and fought to retake the plane. These were people who only 45 minutes earlier were on their way to work meetings or family vacations… people who had no military training, swore no oath but still sacrificed their lives.

It was because of their bravery that Lt. Penney and Lt. Col. Sasseville did not have to fulfill their mission and that Flight 93 was the only aircraft that did not reach the hijackers’ intended target. 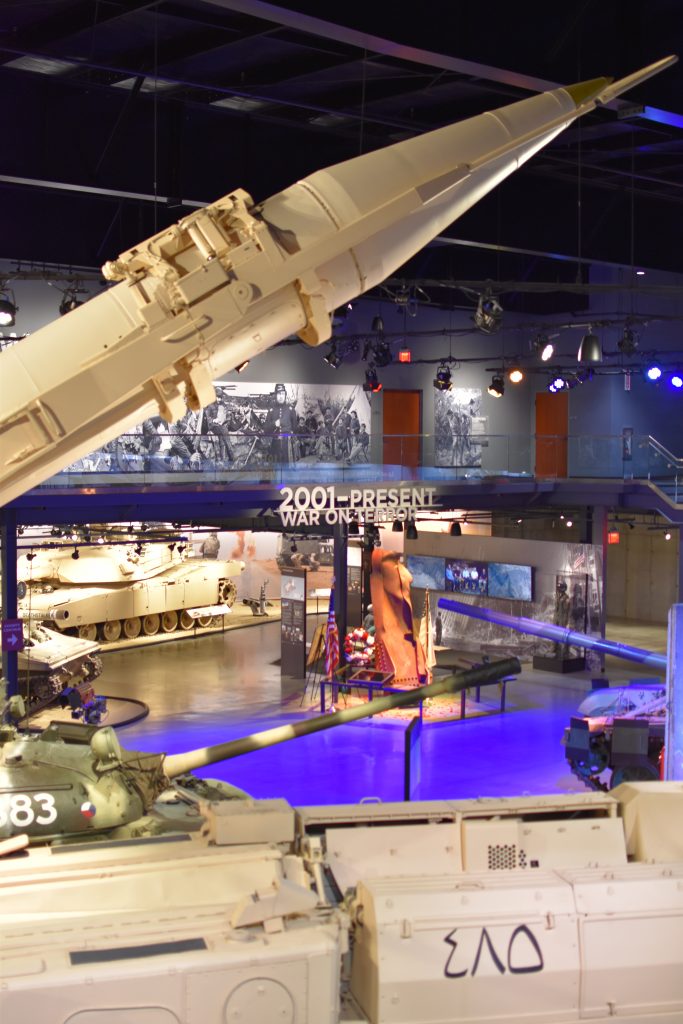 So many terrible things happened on 9/11, yet the tragedy also brought moments of sacrifice and bravery… of coming together as a people, as Americans. I had just returned to New York City after the attacks and walked down to ground zero. Complete strangers would stand staring at the rubble hugging each other and comforting each other. It was a time of unity.


Looking at the twisted piece of metal that once was the Wold Trade Center brought all of those overwhelming emotions back. Our appreciation for Veterans grew deeper. We saw first hand, as the American Heritage Museum states, “the human impact of America’s fight to preserve the freedom we all hold dear.”

Our visit to the American Heritage Museum was really interesting and informative, albeit emotional. They have an amazing opportunity going on where you can learn to drive a tank with a tax deductible donation of $995. Imagine how incredible it would be to drive a real World War II tank around all the while supporting the museum, which is not just an educational center but also a place of community for our Veterans, for whom we owe so much. 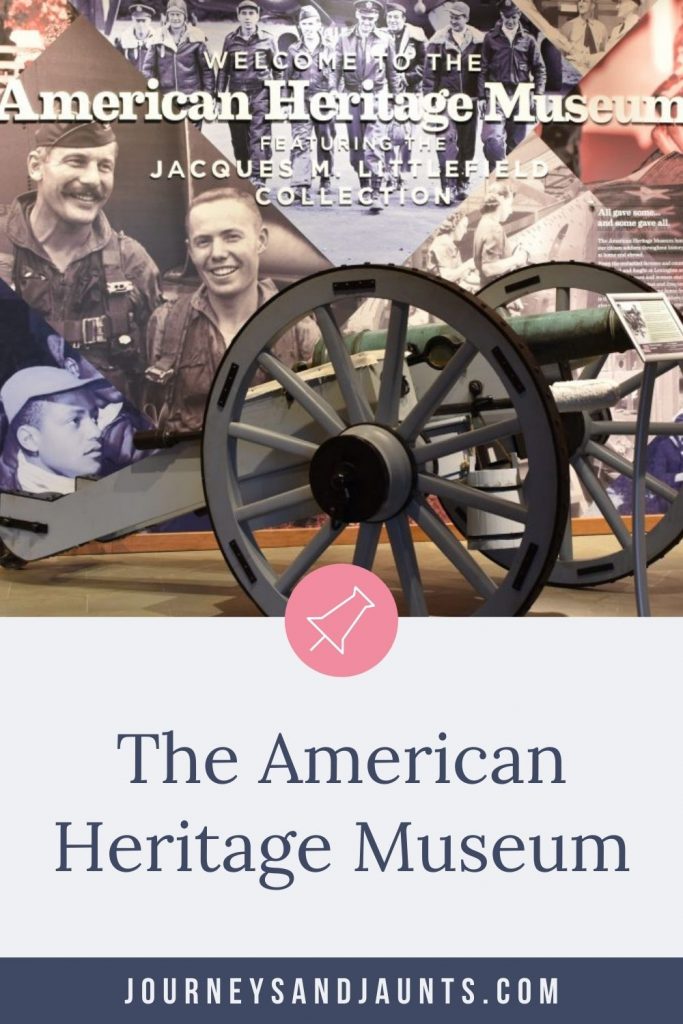 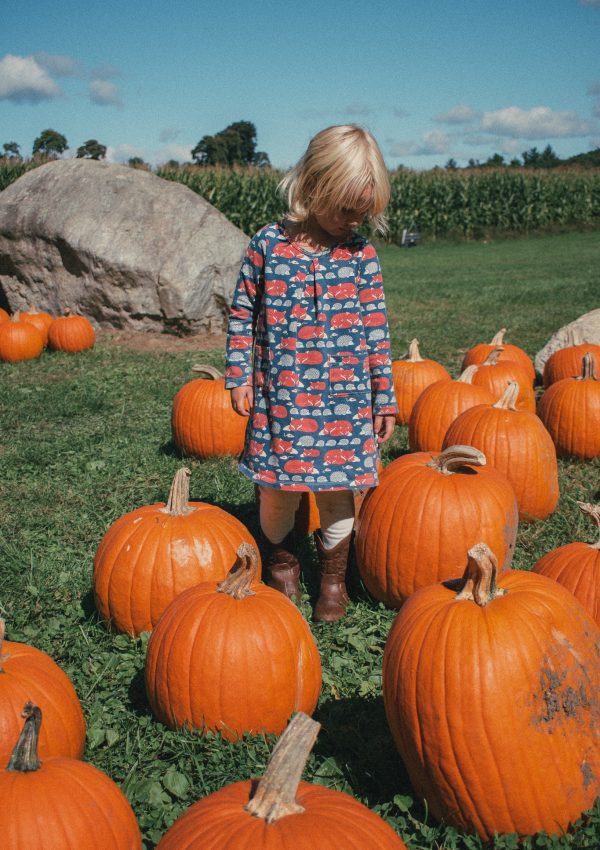 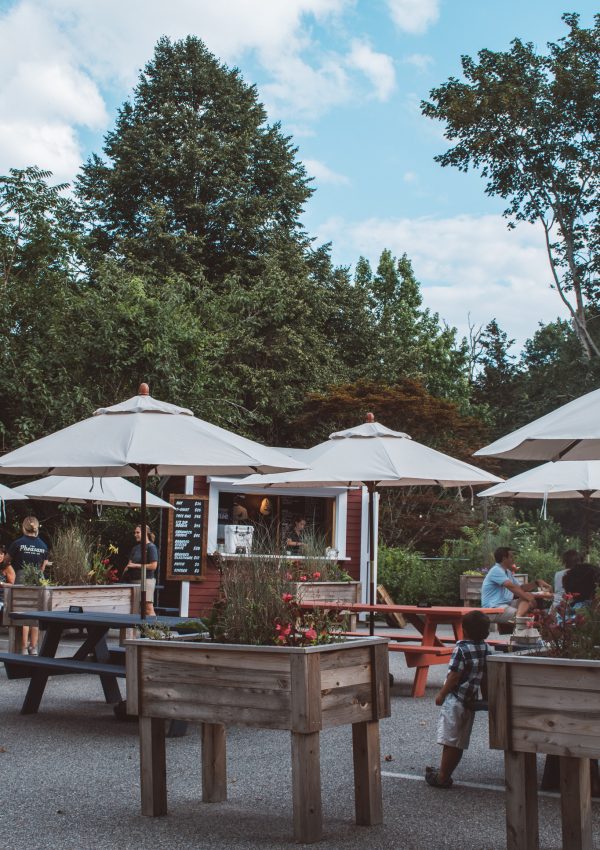 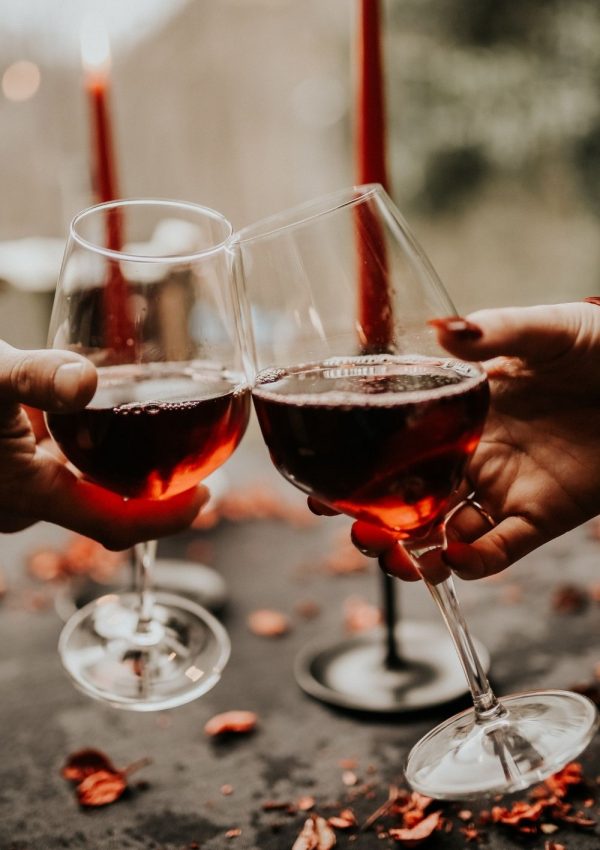 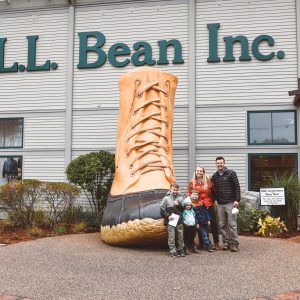 The best things to do in Freeport, Maine